The word “cross” in Gothic letters appears on the 1848 map one and a half miles east of Wavertree. Mr. Cox thus describes it in the Transactions of the Historic Society of Lancashire and Cheshire (volume for 1895): “On the roadside, near Well Lane, stood the slender octagonal shaft of a cross, on an octagon socket and three steps. It was a wayside cross, probably marking the lands of the monks of Stanlaw and Whalley, who had a cell there. The stones were thrown over into the field when the road was widened, and were thence carted away.” The church is of ancient foundation, and is mentioned in the Domesday Survey. Mr. W. Bowdon, of Gorsefield, Patricroft, writes June 24th, 1901: “I was at Childwall on Friday, and looked up what remains of the cross there. Two steps, base about twenty-seven inches, with a socket of about twelve inches, shaft and arms gone.” Mr. Harrison, in his Liverpool District Place-Names, tells us that the modern English equivalent of Childwall is Wellfield or Springfield. We have thus another instance of a well and a cross together. 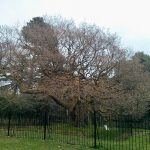 The Allerton Oak is a 1000 year old sessile oak that stands in Calderstones Park. It’s surrounded by a double fence to protect its ancient structure, and metal crutches installed in 1907 hold up its branches. Calderstones Park is in Allerton, which was mentioned in the Domesday Book and has a long history of its […] 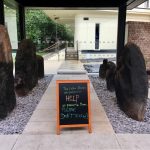 The Calder Stones have a troubled history, even for a site that’s about 5000 years old. While it’s escaped complete destruction like many of its Irish Sea cousins, there are many of these Neolithic sites which aren’t doing too badly. Even those completely denuded of their turf, soil and/or cobble mound stand proud in fields […] 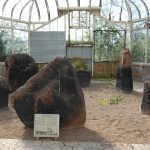