Mr. Hope writes in his Legendary Lore of the Holy Wells of England: “There is a well here which has the reputation of being haunted, a fratricide having been committed there. It was a haunt of pick-pockets and other disorderly characters. It is now built over, and in a few short years the subterranean passage leading to the well will be forgotten.” The following extracts from the Crosse Deeds related to this town:- 1412. Quitclaim from Nicholas de Lyverpull, clerk, to John le Dey, of Lyverpull, his heirs and assigns, of one land of ground, lying between the Crosses next the Shootsacres, which Gilbert de Everton holds by the devise of Latilda de Sefton and the above Nicholas. Witnesses:- Robert de Derby, then Mayor of Lyverpull, Thomas de Bold and Roger de Holland, then Bailiffs of Lyverpull, Hugh de Botyll, Thomas de Gleest, and others. Given at Lyverpuul, in the third week of Lent [4-10 March] 14 Henry IV. [1412]. Grant from John Wodes and Alice his wife of Lyverpull, to John Crosse, of one selion of land, called le Dobul lond lying between the Crosses, in the field of Lyverpull, viz., two hallands lying upon the roadleading to the Breke and one halland on the same road, between the selion late of Derby on the north and land of the late John More on the south. Witnesses:- Hugh Harebron . . . Given at Lyverpull on the 20th day of May 12 Edward IV. [1472]. Grant from Richard Crosse, son and heir of John Crosse of Lyverpull, to WIlliam Crosse his brother and son of the said John of one tenement with houses and gardens, in le Dale strete Lyverpull, in the tenure of Henry Plombe, and of two buildings with chambers next the Cross in the same town. Witnesses, James Molyneux rector of Sefton . . . Given at Lyverpull on 10th September 18 Henry VII. [1502]. 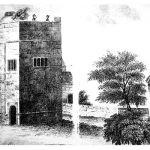 Liverpool has always been a trading port, and so it’s no surprise that features have come and gone in the landscape which sought to make this as easy and safe as possible. Everton Beacon was one such feature, and took advantage of the natural rise in the ground to the north of Liverpool’s centre. All […]

From The Ancient Crosses of Lancashire by Henry Taylor: A water-colour drawing in the Binns Collection shows this cross in an open space near a cottage. A church appears in the distance. The head of the cross is gone, but a portion of the square shaft is shown socketted in the customary way into a […] 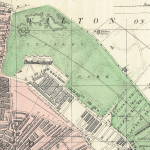 North Liverpool is an area that I’ve become much more interested in since I started Liverpool Landscapes and Historic Liverpool. It’s seen such changes in its time, and been home to every part of Liverpool society. Stanley Park’s a great subject for closer inspection, especially as it’s become something of a metaphor for one of […]