Edward the Confessor chose West Derby for his hunting lodge, and after the conquest West Derby was given to Roger of Poitou. The castle was probably built around 1100 by Roger, and was sited near St. Mary’s church in Meadow Lane.

The site may have been chosen because of its nearness to water (the Alt, and perhaps the stream which once flowed parallel with Meadow Lane). Coal was nearby (with outcrops at Croxteth) and there was plenty of woodland. The existing hunting lodge would also have been a factor. West Derby also stood on the crossroads of routes from Hale to Aughton and Liverpool to Warrington and Prescot.

In 2022 the Channel 4 programme The Great British Dig excavated a trial trench on the field in Meadow Lane that covers part of the site of the castle. They also excavated some smaller trenches in local residents’ back gardens. The archaeologists found pottery from the 12th to the 18th centuries (as well as more modern items like toy soldiers and a Second World War bullet case).

Eventually they excavated down to the moat itself, finding a sloping surface probably churned by later animals. They also found a loosely-built dry stone wall which may have been linked to post-castle farming. By measuring from one edge of the moat to the centre, and doubling the distance, they estimated it to have been around 9m (27 feet) wide. The excavation suggested it was no more than a metre (3 feet) or so deep. So while its defensive capability would have been less than imagined, the width would have been a fine reflective setting for a landmark castle like this.

The archaeologists also found the likely remains of the aforementioned stream, and the possible location for a water-powered mill that was known to have stood on the stream.

In 1213 a garrison of 140 foot soldiers, ten knights and crossbowmen were posted at the castle. But by 1235 all garrisons had been moved to Liverpool castle. A 1326 document mentions the “site of a ruined castle in West Derby” (Cooper & Power, 1982: 41), and the castle had probably gone out of use entirely by 1297. It had lost its importance at the same time that Liverpool, with its own castle, had risen to prominence. The site was finally levelled in 1817.

West Derby Chapel was situated in the centre of the village, a space now occupied by a monument. It was first mentioned in the mid-14th Century, and mentioned again in Edward IV’s reign in relation to a repair, deemed important as the chapel was useful for holding the king’s court (and this was before a […] 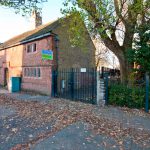