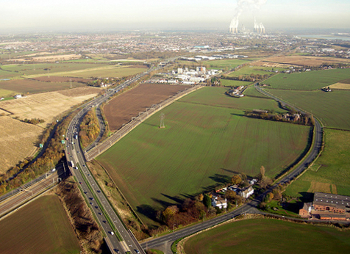 Ditton Brook makes up the northern boundary of Halewood, and flows in a south-westerly direction before flowing out into the River Mersey between the town of Ditton and Hale Bank. Along with the River Alt

The archaeology of Ditton Brook

The Ditton Brook valley has been an important area of human settlement for thousands of years. Excavations have revealed the remains of half-finished stone tools in a settlement used around 4-5000 years BC.

In addition to the tools evidence was found of a fire (part of a temporary camp) and food preparation. As Ditton Brook was a source of fresh water, it would have naturally attracted settlers.

Where the stream runs into the Mersey, the slower water would have been a protected haven for fishing in the wider waters of the larger river. The area would have benefitted from both salt and fresh water fish from the two rivers.

In more recent years the brook has flowed through the industrial areas of Widnes and Ditton. The channel has been straightened just before it reaches the Mersey. The area has become more polluted, and St. Michael’s Municipal Golf Course was closed due to arsenic poisoning.