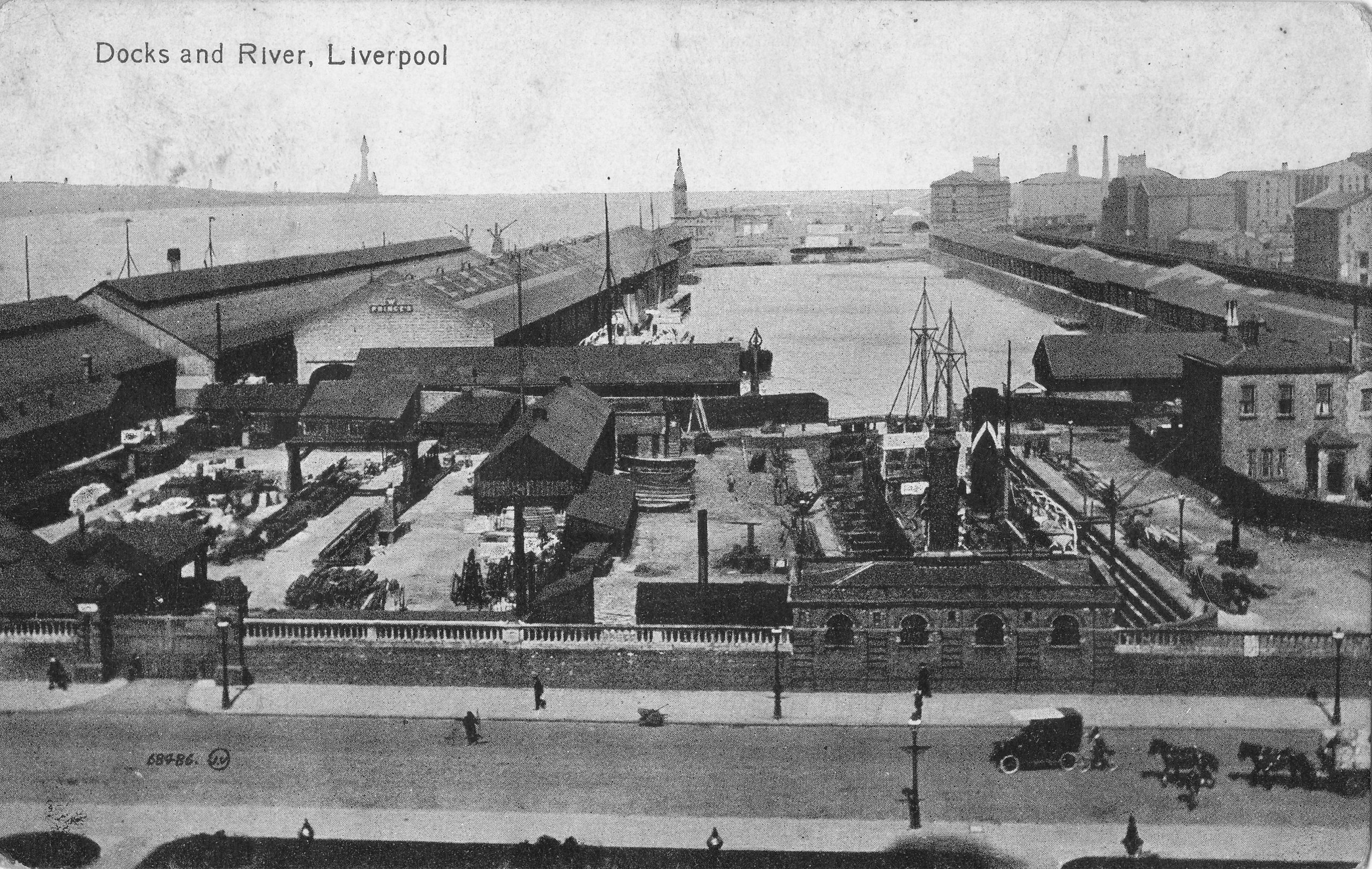 Recently, I was contacted by Monica Lewis who had found a collection of postcards belonging to her grandfather. He was in the Navy in the First World War, and Monica thinks these postcards (amongst many from other parts of the world) were accumulated over the course of his career.

She’d like me to share these postcards with you, so I’m putting them here along with a few words about each. Some views might be familar, having been popular postcard views at the time, while others are less typical. I’m not sure how many postcards sent these days include views of working docks! It goes to show how industry was of interest to the general (proud) public in those days, and it’s a treasure trove for us!

Note: all the images have been uploaded in their original high resolution versions, so you can click on them for larger versions, and save them in the usual way.

This is an oft-repeated view of Liverpool’s most fashionable shopping street at the time (and it’s still one of the best today). There’s a horse and cart pulled up next to the Lyceum, and three or four very early motor cars are parked or travelling up and down the road.

As well as the smart neoclassical Lyceum, there is a wonderful set of shop frontages on the right, starting with Faraday’s at the bottom, and including a clock projecting from an upper storey further on. And of course at the top of the street is St. Luke’s not-yet-bombed-out church.

Canning Dock is one of the oldest central docks in Liverpool, built in 1797. This image shows masted ships on the three visible sides, and warehouses all around.

This is a much more unusual view. Here we see a view looking northwards over Prince’ Dock. What struck me is just how neat it all is! There are pies of wood, a ship in dry dock on the right, and a neat house next door – the Marine Surveyor’s office. On the left is Liverpool’s Riverside Station, linking ship passengers with the city centre and the rest of the country. A motor car and working horses complete the picture at the bottom. Quite a transport hub in action here!

It looks like this photograph was taken from an upper floor of the Liver Building, and the raised view shows a couple of interesting details further afield.  We can see chimneys and warehouses to the north east, and over to the west is the outline of New Brighton Tower, reminding us of the aspirations of Wirral as a destination of leisure!

This is a similar view to the others, looking north west towards Wirral across the roof of the Riverside Station. The New Brighton Tower is visible in this view too, though in less detail. It’s much easier to see the ships on the Mersey (though there aren’t many), including one docked at the landing stage. We can see the clock tower and the adjacent Dock Master’s Office at Prince’s Half Tide Dock.

I’m not sure whether it’s a typo, or if this building was once known in the plural, but this photograph gives a great view of the new Liver Building context. The Tower Buildings (1906-10) peer out from behind, with the Liverpool Overhead Railway running between down the Strand. The much older St Nicholas’ Church is also visible.

What’s striking here is the neat green plantings around the approach to the landing stage. Bushes and lawn line the road at which a cart is parked. We can also see the offices surrounding the churchyard.

It’s the little details in this picture that I like the most. Of course, front and centre is St George’s Hall itself, dark from the air pollution of Victorian Liverpool, but none the less grand for all that. But look around the scene, and a lot more shows itself worth looking at.

Lime Street Station and the shops fronting it can be seen to the right, while on the left we can see the Wellington Column at the top of William Brown Street. St John’s Gardens look newly laid out (they opened in 1904), and the large trees which surround it and look stunning lit up at night have not grown up yet. In the foreground are the steps and translucent tiles indicating the toilets on Old Haymarket, along with the kiosk (tram (driver) shelter?).

This is another early view of a tidy St John’s Gardens, looking out over William Brown Street and its wonderfully elaborate street lamps, which also hold the overhead tram cables. The ‘Free Museum and Library’ and the ‘Technical School’ (as they are marked on contemporary maps) are easy to see, nearly cheek-by-jowl with the industrial chimneys behind Old Haymarket and further into town.

Since sending me the original set of postcards, Monica has discovered this great picture of the RMS Lusitania at the landing stage. The Lusitania was famously sunk by a German U-boat off the south coast of Ireland in May 1915, bringing the US into the First World War. So that backs up the idea that these postcards are from around 1910 – the Lusitania’s maiden voyage was in 1907. 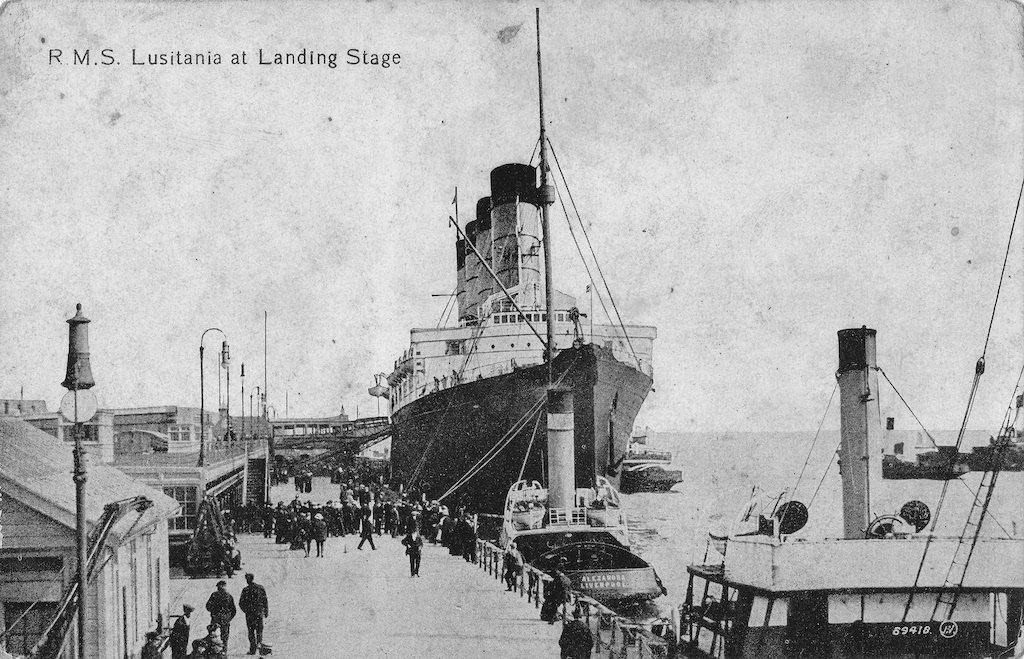 I’d like to thank Monica again for sending me these postcards. It looks like she was correct in thinking they’re early 20th century. Judging by the buildings and fashions it looks to me like they’re from around 1910. That makes them a fascinating insight into a point in time in the city. Having all the photos taken at a single time helps give us an overall feel for the landscape across the city.

I hope you enjoy them!