I thought it would be worth posting at least a short review of this pair of books which came out in late 2020 from the British Library. I was sent review copies of both books by the Library, for which I’m very grateful, but this review remains unbiased, and contains all my own opinions!

There are two books from this new series of reprints:

They were originally published in 1724 and 1734 respectively, and these new editions (hardbacks) present them in gorgeous new packaging. The design is modern, but with a heavy nod towards designs of the times. The front covers both make use of one of the c.25 engravings within, and the books look great standing next to each other on the shelf.

Inside, the text has been re-set, so although they preserve the (sometimes tricky) language and spelling of the originals, they don’t suffer the readibility problems of similar books that reproduce the text, almost photographically, as it originally appeared. These are enjoyable books to read.

However, that’s just appearances really, and I can be a book snob! When the publisher approached me, they must have had an inkling that my dear readers would have some interest in the topics. But does that stack up in reality?

These two volumes are not just interesting for their content, but also their context. They are early examples of journalistic writing in a longer form. They don’t shy away from highlighting the less respectable aspects to the lives in question, and you could certainly imagine these entries appearing as obits in the modern tabloids! These books were designed to sell by the cartload, and the tone is designed to draw the reader in. Indeed, most of the lives do end with the death of the subject, more often than not on the gallows. The apparent author, Captain Charles Johnson, is probably a pseudonym, and has been believed to be Daniel Defoe (of Robinson Crusoe and Moll Flanders fame)

The books were originally published at the height of interest in their subjects, and it feels like the right time to re-release them.

The introductions to the books, by Sam Willis (him off t’telly) explain all this, and help to place the books in their time. For that, we’re warned to take the bios as entertainment rather than encyclopedic, but as every good historian knows, examining how a source writes about its topic is as instructive as any authorititative take!

Having warned you about the source of the stories, it’s got to be said that the author pulls no punches. Blackbeard (Edward Teach) comes to life as an extremely unpleasant and cruel man. We get details of rivalries and a variety of backgrounds (Stede was supposedly a bored nobleman). And we hear everything up to and including the almost inevitably trial and execution. This, if nothing else, reminds us that Pirates and Highwaymen were, with a few exceptions, criminals.

One unexpected aspect is that the lives of two female pirates are recounted. The original author is upfront about including these women because they were unusual, and their lives are as colourful as their male counterparts.

I might not have picked up these books if they hadn’t been flagged up to me. As I’ve said, they’re beautiful objects and I am enjoying working my way through them. They’re like small encyclopedias: each chapter is a separate life story. This isn’t to everyone’s taste, and doesn’t offer a rounded view of ‘piracy in the 18th century’ or anything like that. However, judging it as a book which has come down to us from 300 years ago it’s a definite thing of interest.

There are no direct links to Liverpool history as such, but of course …Pirates gives a glimpse of maritime life at a time when Liverpool was just beginning to come into its own as a trading port. If you want a fun pair of volumes that will while away many a dark evening, or if you’re a fan of swashbucking adventure tales told in an engaging fashion, then these are books you’ll enjoy. For those who need a Liverpool history angle on their reading, Pirates might be a good place to get the wider picture. 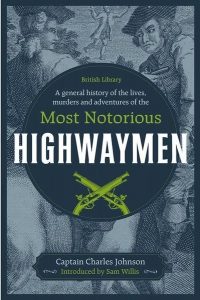 Both these books are published by the British Library (£20), and so are available to buy directly from them. 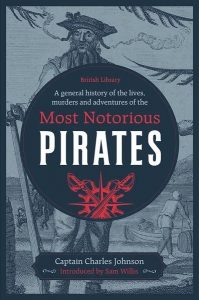 Alternatively, to help your local bookshop, you can buy them both from Hive (£14.95 at time of writing). (Buying from Hive also sends a few pennies to help keep Historic Liverpool online.)

A General History of the Lives, Murders and Adventures of the Most Notorious Pirates British Library | Hive

A General History of the Lives, Murders and Adventures of the Most Notorious Highwaymen British Library | Hive