The church (dedicated to S. Michael) is of ancient foundation. The ornamentation of the font testifies to the pre-Norman date of the edifice. A handsome cross was erected on the village green, near the south-west corner of the churchyard in the jubilee year, 1897. It replaced an older cross, which was erected about the year 1819 from the design of the late Mr. Rickman. His original drawing is to be seen in an adjoining cottage. A photograph of the cross, taken about the year 1878, shows a slender Gothic pillar on a flight of  stone steps. Mr. F. T. Turton informs me that: “Prior to this date [1819] no cross existed. The ground was used for the purposes of bullbaiting and cockfighting; occupations which caused much trouble to the then young vicar of the parish, Ellis Ashton, and I have always understood that it was with the view of somewhat filling up the open space or green, that he was instrumental in having this cross erected. It is related of this vicar that the annoyance being so great, he did on more than one occasion take off his coat and severely castigate some of the offenders.” 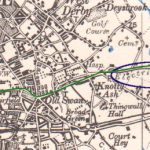