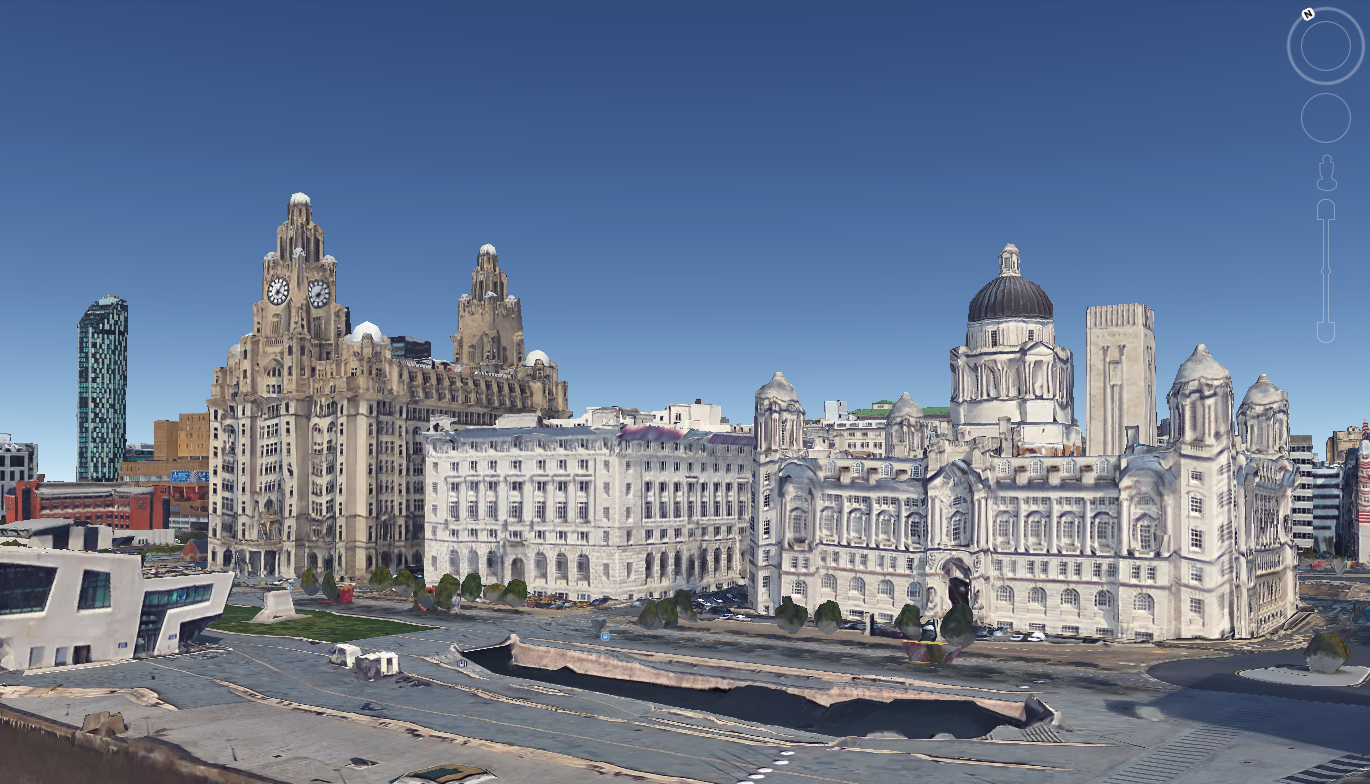 It’s been all over the news lately: Liverpool is one of the first British cities to be rendered in three full dimensions on Google Earth. There was, as a crazy extra, a rumour going around that it was in preparation for a new Google office which was opening in the city.

That latter rumour was soon quashed, but as a blog interested in all things Liverpool, the city, and interactive mappy things, I investigated the 3D buildings fully. I’ve put together a quick list of great views I’ve spotted. Download Google Earth to try them yourself, but in case you can’t, I’ve added some screenshots to give you a taste.

As one of my childhood haunts, I love Croxteth Park. It reminds me of bike rides, school trips, woodland adventures and, in later years, footy games in the fields.

The view I’ve chosen here shows the Hall like you’ve probably never seen it: from just above the original Tudor wing, taking in the ornamental gardens, the cafe in the stables and Home Farm. It ties together the different parts that I’ve been to with different groups and people over the years. My internal ‘landscape’ of Croxteth Park – one I’ve walked in pieces – is laid out before me.

As anyone who’s spent a little time discovering Liverpool’s history, or even their own family tree, will know, Liverpool (and a lot of other industrial cities) was once covered in the infamous court housing. So called because around a dozen residences fronted on to a communal court, these were cramped conditions, having too many people in a space which was none-too-good in the first place.

These slum buildings were cleared in the 20th century, but one court house still survives in central Liverpool. Well, it survives to some extent. It’s partly ruined, derelict, but is owned by the Liverpool School of Tropical Medicine, and was listed in 2009 – that’s how important these are architecturally.

It’s not easy to get access to them, but with the Power of GoogleTM we can have a little look-see.

Another scene of childhood trips, Sefton Park has a permanent place in my own and thousands of others’ hearts. Originally laid out along with Newsham Park and Stanley Park to serve as a free green space for the good people of Liverpool, it’s always been full of interesting features like the Pirate Ship, the Palm House, and the Boating Lake.

The whole area now occupied by the Park was previously farmland, with a stream running through which ran out into the River Mersey at Knott’s Hole (more recently the site of the Garden Festival and the Otterspool Promenade). The stream was adapted and dammed to create the Boating Lake, but it still remembers its origins. Google Earth gives us a beautiful opportunity to see how the Lake links to the Mersey in the aerial view below.

It’s a beautiful piece of suburbia, a collection of vernacular homes, and a planned community built by one of the foremost philanthropists of the last 200 years. As a study of landscape Port Sunlight is a perfect package: well-defined, well documented and almost visible from space in it’s distinctiveness.

The Google Earth view shows the Lady Lever Art Gallery, the large open space in the centre (The Causeway) and the scattered memorials and statues. The highly-planned layout is easy to appreciate from this angle, and the software itself gives you a chance to take a tour from the comfort of your own armchair.

Edge Hill, a canyon into the underworld

For those familiar with the modern city, many parts of Liverpool are distinct, and jump out on a map. The aforementioned Sefton Park is one, as are the docks, the entrance to the Kingsway Tunnel and two football stadia either side of a certain park…

The cutting which takes trains from the world-important Edge Hill Station to Lime Street isn’t quite so easy to spot on a map. It’s narrow, dark and blends in with the gridiron streets nearby. Except when you look at it from this direction (below). It literally cuts straight across the landscape, heedless of surface features and topography. It’s a direct link between the two stations, the line of least distance. It’s a monument to Victorian ambition, engineering and fearlessness in the face of mere natural obstacles for the brand new iron horse.

If you’ve never tried Google Earth before, now’s a great time. It’s fairly easy to get used to the controls, and once you’ve got the hang of them there’s a whole world out there to see. To see 3D Liverpool, simply zoom in on the city using the mouse, or the arrow controls in the top right of the screen.

Once you’ve looked at the views above, try these ones too:

Anything else you’ve spotted on your virtual travels? Let us know in the comments!