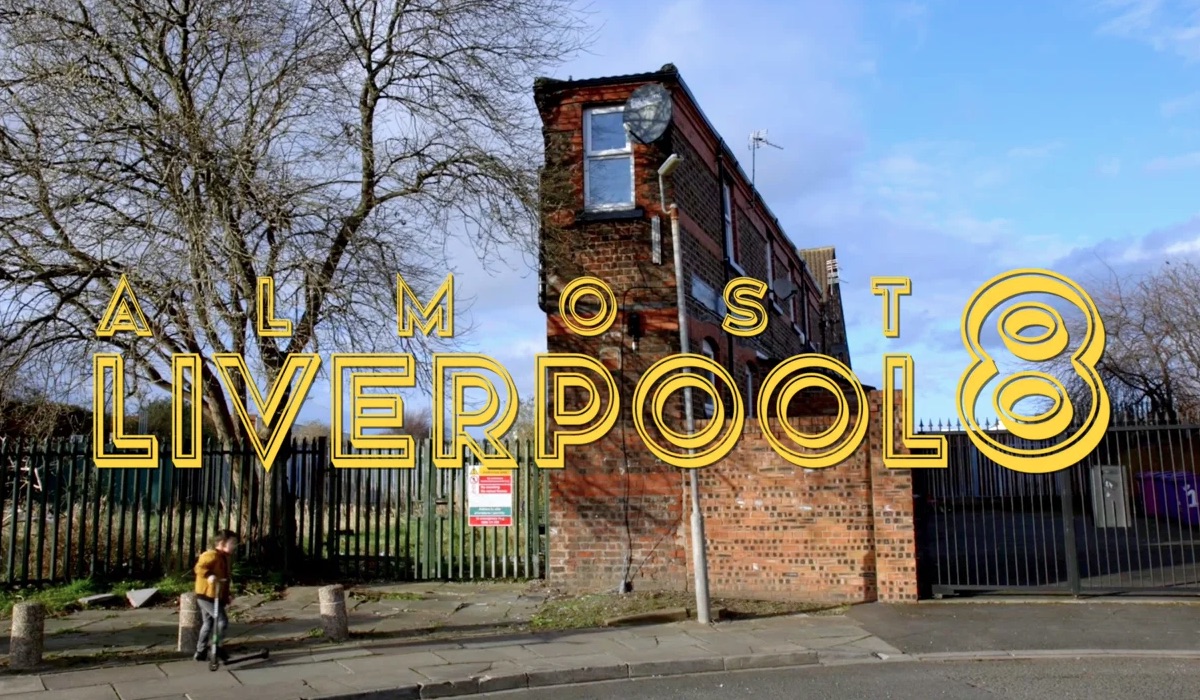 Toxteth. Liverpool 8. Sometimes just running those two phrases together can get people hot under the collar. One thing we learn from Almost Liverpool 8, a new documentary from Dartmouth Films is that the name ‘Toxteth’ was hardly heard before 1981, that watershed in the area’s history. I didn’t know this, having got so used to seeing the word on old maps of Liverpool all the time. It wasn’t the only enlightening part of the film.

It’s easy to see Almost Liverpool 8 as an attempt to reclaim the postcode and the Toxteth name from the news media. Luckily its creators have found a unique angle to do this. This isn’t trying to be a polished tourist information brochure; it’s more real than that. Truth is at the heart of it, and the question of who owns that truth.

There are countless talking heads on screen, but the Toxteth’s landscape is the star of the show from the get-go. The opening scenes flick like photographic slides (albeit tiny slices of film) from terraces: Victorian worker and grand Georgian – to the Florrie, to 80s and 90s houses to the rejuvenating Granby. This photo/film montage leads into an introduction to Don McCullin, a photographer and our eyes and ears on 1970s Liverpool.

Don was an ‘outsider’ initially, perhaps a decade or two before the time we’ll come to. He worked on the trains as a young lad in his native London, but his first job took him via Euston to Lime Street and, more significantly, Edge Hill, four times a week.

Young McCullin began to explore Edge Hill alone, on foot, and fell in love with the place, and the wider city. In his later years he became a professional photographer, and was on Merseyside in the 1970s to document the then rapidly changing landscape.

If the earlier snapshots showed just how varied Liverpool 8 is physically, Almost Liverpool 8 now introduces us to the people of Toxteth. A few are shop owners (newsagents, restaurants), one a photographer, another (Barry Chang) a beekeeper. Plus there’s Joe Farrag (source of the above name-related fact), Ronnie Hughes of A Sense of Place and Roger McGough of… well, Roger McGough (and, of course, The Mersey Sound). There’s the next generation too. A woman who set up two salons, and P3Lz, rapping her Fixed Sights, as well as the afore-mentioned restaurant owner with his young family.

These people give their sense of Toxteth and the way life is there. Farrag reminds us that the great attraction of Toxteth, historically, was that it was close to the south docks. Businesses built up to serve sailors on shore leave (yes, including those types of businesses…), of which the Granby Market might be the inheritor. Today’s market’s affordability, to sellers as well as buyers, is its key feature. You don’t need to make money to have a stall. You can come and chat – it’s part of the glue that holds the community together. Hard-nosed commerce would just get in the way of being here.

The variety of landscapes and voices quickly demonstrate that Toxteth/Liverpool 8 isn’t a thing. It’s many things, a collection of things, a recipe with places and people as its ingredients. It’s certainly tight-knit, and loved. Pride is everywhere. These labels – ancient name and modern postcode – can be used to foster a sense of solidarity as much as they were used to blacklist this part of Liverpool once upon a time.

Liverpool 8 (and by extension Almost Liverpool 8) is also a source of wisdom. Chang the beekeeper compares bees and humans. He acknowledges the crucial role bees play in pollination – without them there is no food. But he also highlights that they (at least those bees in his own hives) would get nowhere if they adopted humanity’s tendency to play every-one-for-themselves. They work for the hive, which is for each other. They’re role models. Perhaps this is how Liverpool 8 functions: a hive of activity.

Back to McCullin: Don’s photography is the thread that runs through the film. He holds forth on how he saw Liverpool in the 70s. Never coming across like a shocked anthropologist, nor patronising the survivability of the natives, he admires the place. He was soon part of it.

The time he was photographing – the 1970s – was a period of ‘slum’ clearance, and you can hear those quotation marks in McCullin’s voice. Mistakes were made, he says, and we’re still suffering the consequences. Future homes were demolished, though he knows the Council believed what they were doing was the right thing. Again, we’re learning lessons and making comparisons. What Would The Bees Have DoneTM?

Perhaps unusually, we don’t hear of the places people ended up when they were moved out of their terraces; this film is laser focussed on L8, and gives us room to let our gaze rest on these streets, both from then and in the now.

A single photo of Don’s does the rounds among the interviewees: that of a girl jumping over a puddle, the grey rain-soaked and cleared streets of Toxteth behind her. I won’t spoil the details of how this pans out; suffice to say that it conjurs all sorts of reminiscences and reflections. Ronnie Hughes brings out the old maps to see if he can locate the spot. It’s taken for granted that the landscape is different now.

Ronnie also notes that ‘middle class areas are never shown in the rain’. This is working class Liverpool. And this observation lies at the heart of Almost Liverpool 8: what gets communicated about a place like this, and how does this rub off? What unconscious biases do photographs, and the choices made when taking them, add to the conversation? Especially in light of later events and media coverage. Who gets to say what Toxteth is? Who gets to form its reputation? Don? P3Lz? The news media? Dartmouth Films? This review(er)?

Ronnie tells us he doesn’t like history (it can devolve into ‘trainspotting’). I get the feeling he’s thinking specifically of how the study of the past risks fossilising it, getting lost in the detail; missing the story, the people. History can prevent a place changing, moving on, just as much as it can give it positive identity and an anchoring history. The trainspotting type of history (“it wasn’t there; it was over here”) can weigh a place down.

As McCullin says, Liverpool (and Toxteth) people have always said “we won’t be judged”. Buster Nugent says Toxteth “always rises from the ashes”. This kind of optimism, that justice can be reclaimed, depends on being able to leave those ashes behind. And what is justice if not truth?

Eugene Lange, of Urban Griot, perhaps identifies some of the most important facets of living, which the community of Toxteth embodies well. “You’re never just you”, he says, echoing the sentiments of the beekeeper, you’re part of the world, in a relationship with it. Remember, he says, we’re genetically part Neanderthal, the rest of the world is in our very genes.

One thing that struck me is that every person featured in this film has, to some or other extent, a Scouse twang in their accent. That goes for the Barry Chang with his largely West Indian voice, the newsagent from Aden-via-Cardiff and the restauranteur from Norway. You can bring yourself into Liverpool, but Liverpool will insinuate itself into you too!

If anyone needs evidence that Liverpool 8, or Toxteth, is not the place of the 1970s, but is also the place that grew out of the 1970s, and all the history piled up before then, Almost Liverpool 8 is that evidence. Toxteth is ‘almost’ the place we think it is, but so much else, and maybe ultimately indefinable.

Most importantly, if this film holds anything like the truth, it’s a great place to live and work.

The film is a loving portrait, locally made with pride, that’ll make you smile, laugh out loud, maybe even well up. It’s a letter to the wider world about the truth, the present, of the place. It’s a message from the people in it, like the actor Brodie Arthur, saying: “We’re here; we exist; and we’re fuckin’ shit hot.”

Almost Liverpool 8 will be showing at the Royal Liverpool Philharmonic on Wednesday September 1st 2021 at 7:30pm.

To find out more, and book tickets, go to the Almost Liverpool 8 trailer web page.

One thought on “Film Review: Almost Liverpool 8, a portrait of Toxteth in the 21st century”