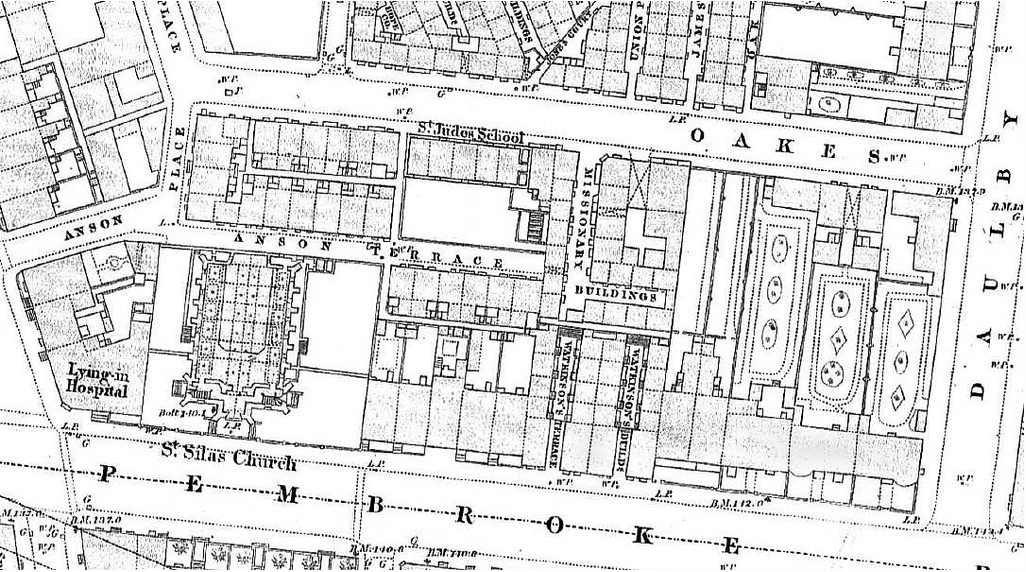 This is part of a series of posts based on the talks given at the Recent Developments in Merseyside Archaeology conference. It was held on the 13th October 2018, and took place at the Museum of Liverpool. Liz Stewart spoke about Pembroke Place, and the different projects which have been going on there. Galkoff’s Place featured prominently, as did court housing and the area’s ‘darker’ history.

Liz began her talk with an overview of the project she ran at Pembroke Place. Liverpool’s famous School of Tropical Medicine are landowners in the area, and have been a partner in the project. The centre of the project has been Galkoff’s butcher’s shop and Watkinson Terrace – a court house next door.

In 1835 a map by Gage documented the high density of residents in the area. Before this time the area had been a place of ‘goodly mansions’, but the owners of those had started moving out to the more salubrious outskirts of Liverpool. Their large houses were disappearing, slowly replaced with much smaller dwellings. However, some of these larger villas still stood to the east of Daulby Place when the smaller buildings appeared on the map.

Liverpool’s population in the 19th century

In the early 19th century 40% of the people of Liverpool lived in cellar dwellings. Even at the time, these conditions were known to be too poor for living, and enquiries were run at the time. In the early 20th century slum clearances finally began.

Pembroke Place once consisted of eight houses on it, around two courtyards. Today, only two of those eight houses remain, as back rooms to the shops fronting the street.

The Museum of Liverpool wrote a report on these houses, and collected information about the social context of the street. Social context drew on newspaper articles, which often referenced ‘Little Hell’, the area’s nickname. Anson Street was the centre of Little Hell, which had a reputation for high numbers of murders and brothels. This reputation was no doubt fuelled by the newspaper’s need to sell copies. Liz mentioned that the articles were misleading with their exaggerations.

The archaeologists, including Mark Adams, found structures belonging to the court houses. There was a light well as street level, letting sunlight into the lowest dwellings. There is evidence of the buildings’  alteration and adjustment, including around the light well. The finds were of surprisingly high quality, with bowls, a domino and a ceramic egg dug up. These show that, despite the conditions, people felt it important to surround themselves with ‘non-essentials’.

Court housing may be a familiar topic for Liverpudlians. But the evidence from the newspapers, and even the excavations, brought to light disturbing details of life in the courts. Even the census records tell of the living conditions.

There were indeed murders, including those of children, as well as other social ills. Should a museum talk about these? Is there a danger of treating the information like those Victorian newspapers did? Does a museum run the risk of accusations of exploitation?

The Museum of Liverpool conducted a survey, and 100% of people thought that a museum was an appropriate place to talk openly about ‘dark’ and troubling history. However, 90% thought that child murder was something to leave out, even from museums. This is likely related to the family audience museums attract.

The future of Pembroke Place

The court houses, now part of the shops which front on to Pembroke Place, are safe from deterioration for now. (They are listed buildings.) The tiles which fronted Galkoff’s butcher’s have been removed, conserved, and are on display in the Museum of Liverpool for the next five years.

The census reports show that, although court houses, these buildings did not house the poorest people. Residents had steady jobs, for example. But Liz admitted that there’s more work to do to establish anything for certain.

In answer to a question from the audience, Liz told us that there were several Jewish businesses in the area, as well as Galkoff’s, until the 1950s. At that point many of them moved into south Liverpool, around Wavertree and Childwall. 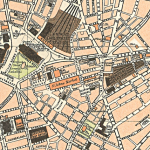 Today’s map is from the end of the 19th century, part of the Royal Atlas of England and Wales, published in 1898. It’s one of my favourite views of Liverpool at the height of its global power, for several reasons. 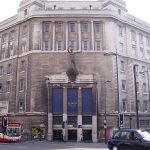 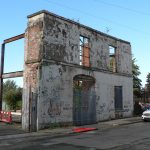 The Williamson Tunnels – Going underground in Liverpool history, part I

Last week was one of my history-indulgent weeks on Merseyside. One where I catch up on the ever-changing town centre (it’s still changing), check that my book’s still on the shelves of Waterstone’s (it’s not 🙁 ) and book myself on a tour or two (I did). First up, on Sunday, I was lucky enough […]