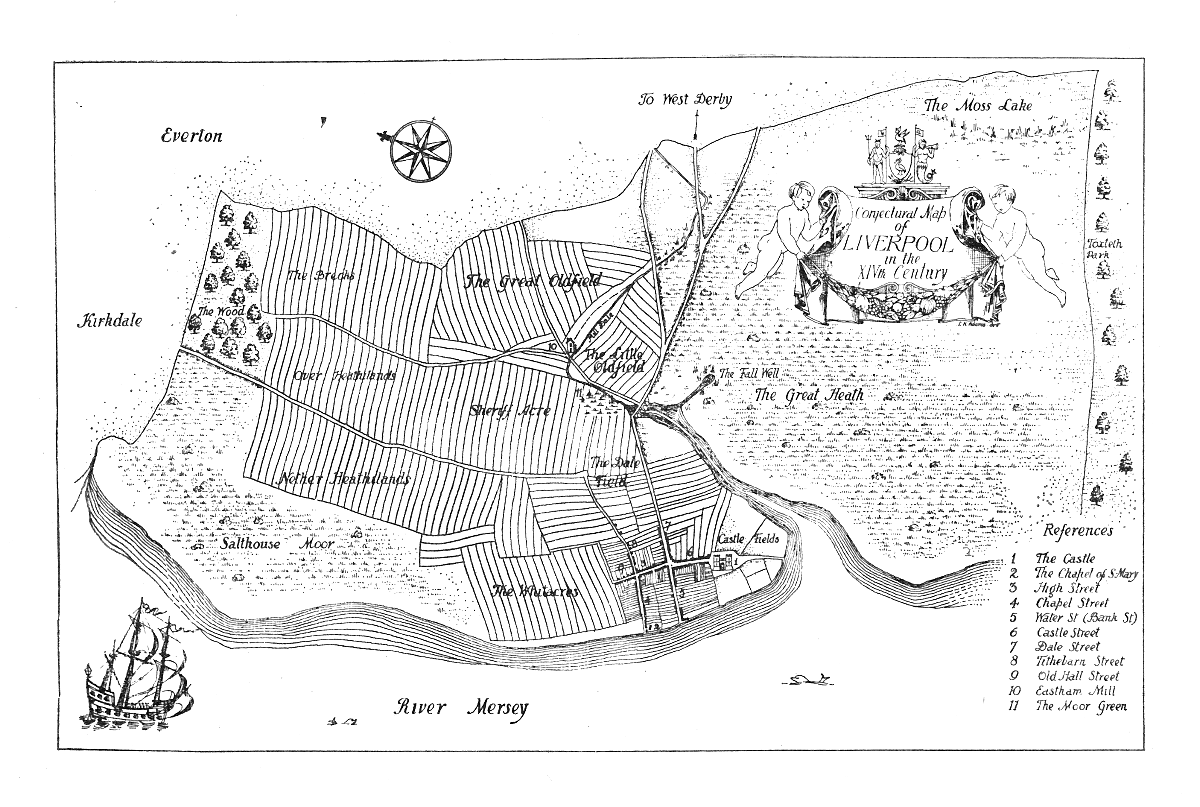 The book was produced to celebrate (you have guessed) the 700th anniversary celebrations of Liverpool’s founding in 1207. Muir had gained a first degree in History at University College Liverpool (as it was then known) and became a lecturer in History there in 1899, after a stint as Assistant Lecturer at Manchester University.

His History is notable for refusing to romanticise Liverpool’s past at a time it would have been very easy (and tempting) to do so, and  John Belchem (in Liverpool 800) says that more recent historical studies have “enriched, rather than undermined” Ramsay Muir’s own writings. Muir was an exceptional historian by Victorian standards.

The map – reproduced here – is, however, typically Victorian, and all the better for it. It’s a neat, hand-drawn and attractive little diagram, with the map itself decorated with an elaborate North arrow and cherubs holding up the title scroll, which is topped by the Liverpool coat of arms. Trees and marshland are picked out for illustration, and the fields are represented by neat parallel lines, evoking medieval ploughing schemes.

The fields are named (Castle Fields, Sheriff Acre, The Great Oldfield etc), and other features like the Fall Well and the Great Heath are labelled. Areas bordering on Liverpool are marked (Everton, Kirkdale) and the road ‘To West Derby’ is indicated too.

There also appears to be a dolphin in the Mersey, but we’ll let that one slide I think…

The description in the List of Illustrations at the front of the book goes as follows:

Drawn, from the calculations and measurements of Mr. W. Ferguson Irvine, F.S.A., by Mr. L. K. Adams, B.A., of the University School of Architecture. The small strips near the streets represent burgages. Each of the larger strips is drawn to indicate the average amount of the agricultural holding of a single burgage tenant. the names of the fields, and the directions in which the strips lay, are definitely ascertained facts; the actual divisions between the strips are conjectural only.

So it seems that this map is as academically rigorous as the rest of the book, and a testament to the pride with which Liverpool regarded its history, even if the historian himself insisted on (rightly) recording Liverpool’s past as “long centuries of small things”.