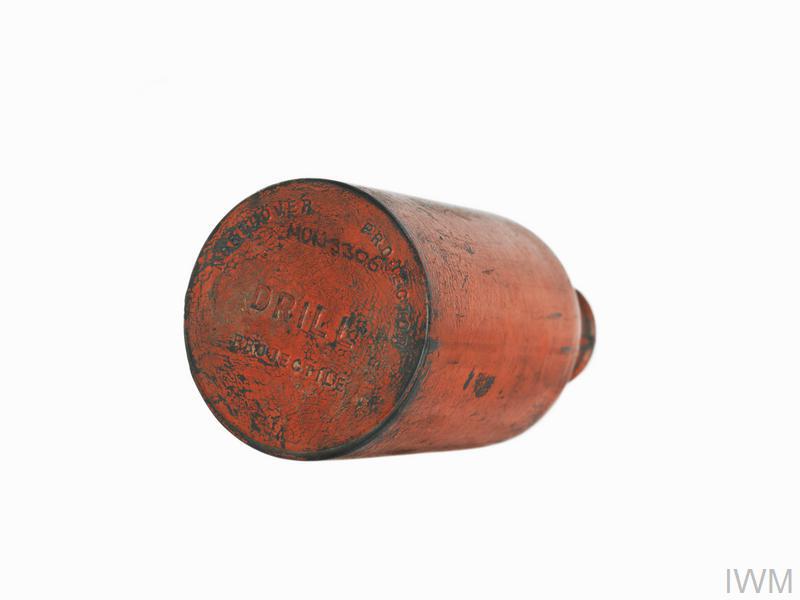 The AW Bombs (manufactured by Albright and Wilson) were too unstable to move, and were originally designed to explode on impact.

Later in the week, another two A.W. grenades were found in the grounds of the same school.

Liverpool’s historic landscape influenced even this bit of history. The grenades were probably made at the Royal Ordnance Factory (ROF) in Kirkby, on the site which later became the Kirkby Industrial Estate.

A similar factory was sited in Speke, as well as other locations around the country.

In the 1930s and 40s the outskirts of Liverpool were popular for this kind of development. The flat landscape provided room for expansion, and the population was increasing rapidly. Following slum clearances in the city centre, men and women had moved to the outskirts. They formed the workforce needed by the factories.

The government of the time judged these areas to be relatively ‘safe’. A huge area of the country , from Bristol to Linlithgow in Scotland, was a fitting place for these factories.

The areas were a good distance from centres of population, but had good road and rail links. Because of this it was easy to take the finished products to where they were needed.

Image: Grenade, Hand or Projector, Drill, No 76 (S.I.P.) (&amp; AW Bomb) (MUN 3306) The ‘live’ version of this grenade, known as the ‘Grenade, Hand or Projector, No. 76, S.I.P. Mk I’, consisted of a short-necked half-pint capacity glass bottle filled with an incendiary mixture and closed with a crown cap. The filling itself was made of yellow phosphorous (128cc), water (21cc), benzine (110cc) and a 3.5in piece of crude rubber, which partially dissolved during storage to give the … Copyright: © IWM. Original Source: http://www.iwm.org.uk/collections/item/object/30021485 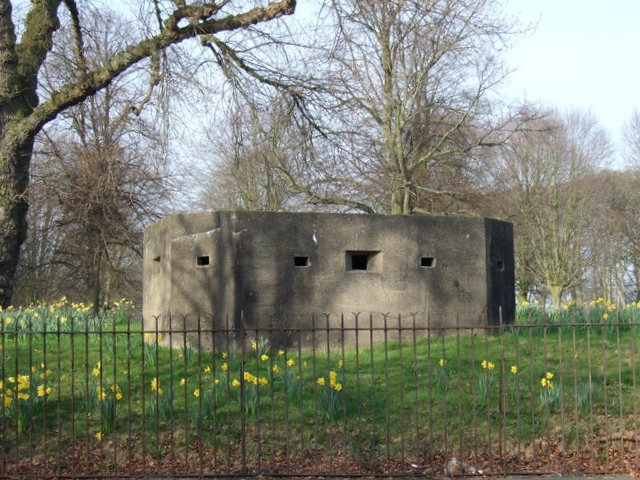 There is an octagonal pillbox in the grounds of Allerton Hall, seemingly ‘defending’ Springwood Avenue from an invisible army. While many no doubt pass it day to day without a second thought, a lot of people are puzzled as to why a pillbox is so far inland, and what feature of any importance is being defended.

Pillboxes in Liverpool during the Second World War

The early years of the Second World War were not good ones for Britain and her Allies. By 1940 a series of German invasions – of Poland, Denmark, Norway, Belgium and France – had brought the enemy to the Channel coast of France. Following the retreat from Dunkirk an invasion of Britain looked imminent, and plans were laid to repel it.

The tactic used was to turn the home landscape into a ready-made battlefield, complete with anti-tank defences and machine gun positions. Although a linear defence along the coastline might seem the obvious choice, in practice it was imagined that the invaders would move quickly inland. Rather than try to hold them back, deep defences would slow the advance, and allow the enemy to pass by, all the better to attack them from the front and rear together! It would also let reinforcements arrive from around the country.

While earliest-built defences did indeed focus on the so-called ‘coastal crust’, as they developed, everything from machine gun emplacements and road blocks to pillboxes and concrete ‘dragons teeth‘ were to be found further and further inland.

The natural features of the landscape would also be taken advantage of. River channels, slopes and hills all affect how a moving army operates, and so the defenders can predict where a tank column is likely to rumble through. Areas can be flooded, roads blocked and obstacles (including mine fields) can be put in place.

The GHQ Line, and Stop Lines

Coastal defences started on the beach. Concertina barbed wire was laid as a first line, with mine fields positioned behind to deal with both vehicles and infantry. Behind this coastal crust were designated ‘stop lines’. The coasts which were most heavily defended in this way were the south and east coasts, naturally, with other lines along stretches of the Welsh and north-west English coasts, including Liverpool. The south and east of England also had stop lines further inland, further barriers allowing mobile defensive forces time to muster.

The length of the stop lines was reinforced with ‘island’ defences – heavily armoured clusters which could attack any army manoeuvring through the less-heavily militarised ‘seas’ between them. The idea was for the islands to funnel the enemy into predictable zones, ready for the defenders to deal with. These island defences were particularly used where there was sufficient local Home Guard units to man them.

In what way are Clarke Gardens a good spot for defence?

It’s hard to say for certain exactly why the grounds of Allerton Hall were a good place for a pillbox in 1940. No doubt the fact that this was land with no buildings on it played a part. It is also on a south west facing slope, and is not far from Garston Docks and a major railway junction (now Liverpool South Parkway Station).

The viewshed from this position would have favoured a machine gun emplacement, and any advancing German army would have no doubt come ashore at the docks to work its way inland towards other strategic positions.

The brilliant new 3D view available on Google Maps gives an indication of the type of view afforded from the Clarke Gardens Pillbox. The River Mersey and the Welsh Mountains are visible in the distance, and the eye is drawn all the way down the slopes to the shore and docks.

Pillbox in the grounds of Allerton Hall, via Geograph, © Copyright JThomas and licensed under a Creative Commons Licence