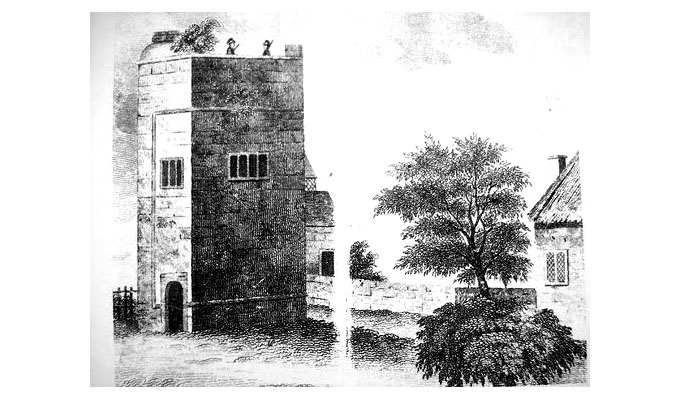 Liverpool has always been a trading port, and so it’s no surprise that features have come and gone in the landscape which sought to make this as easy and safe as possible.

Everton Beacon was one such feature, and took advantage of the natural rise in the ground to the north of Liverpool’s centre.

All the images we have of the Everton Beacon today are of a tower with two storeys (though some sources incorrectly state there to be three). It was built out of the classic Liverpool red-brown sandstone, probably from a source very close to the Beacon’s location. It was reported to be 25 feet tall and 6 feet square.

There was an earth-floored kitchen in the lower storey, with a fireplace in one corner. On the first floor was a living space and above that, on the roof, a cement and stone firebox in which could be set a blaze to make Everton Beacon more visible to vessels on the River Mersey. This may be why rumours have grown up around the Beacon to suggest that it was built to warn England of the approach of the Spanish Armada in 1588.

It’s been written that the Beacon was built in 1230 by Ranuf, Earl of Chester, but Robert Syers in his The history of Everton, including familiar dissertations on the people, and descriptive delineations of the several & separate properties of the township suggests that this is unlikely. Perhaps an earlier form of the Beacon was first erected then, replaced with the more recent version in later centuries.

Part of the reason to doubt a great age was the poor quality of the construction. Syers calls it poorly built and of little architectural merit. Towards the end of the building’s life it was in a very poor state, with a crack running right down its south side, and the whole thing laying “open, unwatched and unguarded” (and therefore uncared for).

Not just a beacon for guiding ships

Syers also tells us that marriages took place in Everton Beacon, the tower acting as a venue for those priests who were cast out of Liverpool during the Civil War for being on the wrong side. In Liverpool’s case the ‘wrong’ side was the King’s. This use of the tower puts its construction back at least to the 1640s or 1650s.

Other residents included a watch movement maker shortly after 1770, and a cobbler around 1783. Whether either of these lived here ‘officially’ (e.g. paid rent) is not known. The picture we get from these possibly unofficial residents is one of abandonment, both of the building and possibly the poor souls who found refuge here.

Syers also notes that it was most often frequented by ‘idlers and casual visitors’, who carved their names and initials into the soft stone walls. Apart from these occasional folk, the tower was open to the elements and the local cattle, who wandered in and out at will.

The End of Everton Beacon

Everton Beacon was poorly built, a useful pile of rock if nothing more. By the 18th Century it had dangerous cracks running down its walls and had been long neglected. One dark and stormy night in 1803, the flimsy structure was felled, perhaps by no more than a gust of wind, the last straw which broke its feeble back.

No obvious remains of the Beacon can be seen today, but its known that St. George’s Church in Everton was later built on or near the site, being the highest point of the hill. Recent map-based research by YO! Liverpool member ‘dazza’ suggests that in fact the site may be just to the south east of the church, raising the possibility that something of Everton Beacon’s foundations may be accessible to adventurous archaeologists.

Syers, Robert, 1830, The history of Everton, including familiar dissertations on the people, and descriptive delineations of the several & separate properties of the township, G & J Robinson, Liverpool.