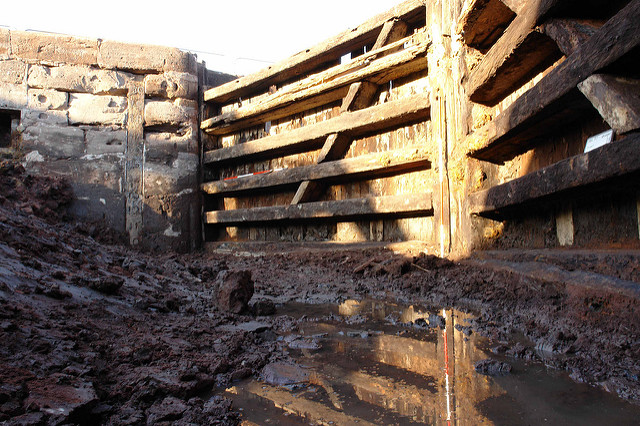 Liverpool is famous for its docks, and to a great extent its part in the development of railways. The ‘lost’ Manchester Dock is one of the places these two came together.

Revealed by excavation in 2007, the Manchester Dock (now under the Museum of Liverpool) was one of the earliest docks on the river front. It was originally no more than a tidal basin connected to the river Mersey. The dock was used to hold the barges of the Shropshire Union Canal Company, and later the Great Western Railway. It allowed goods to be moved between Liverpool and the rail terminal at Morpeth Dock in Birkenhead.

In this way Manchester Dock played a role as a go-between, from the national rail network (connecting Liverpool – via Lime Street – to the industrial centres of Britain) and further ports of call on the other side of the river. The warehouses standing next to Canning graving docks were, until about 1p years ago, the home of the Liverpool Museum field Archaeology Unit. They still bear the name Great Western Railway on the canopies at the front.

Time Team showed a ‘Special’ episode on the Manchester Dock on the 21st April 2008:

Although the trailers would have you believe Phil uncovered this crucial piece of Liverpool’s (and indeed the world’s) maritime history, excavations have been taking place for a while. Read Liverpool Museum’s blog posts from the excavations in 2007. The museum also has a ‘spotlight’ page about the Manchester Dock, and a Flickr photostream of the excavations.