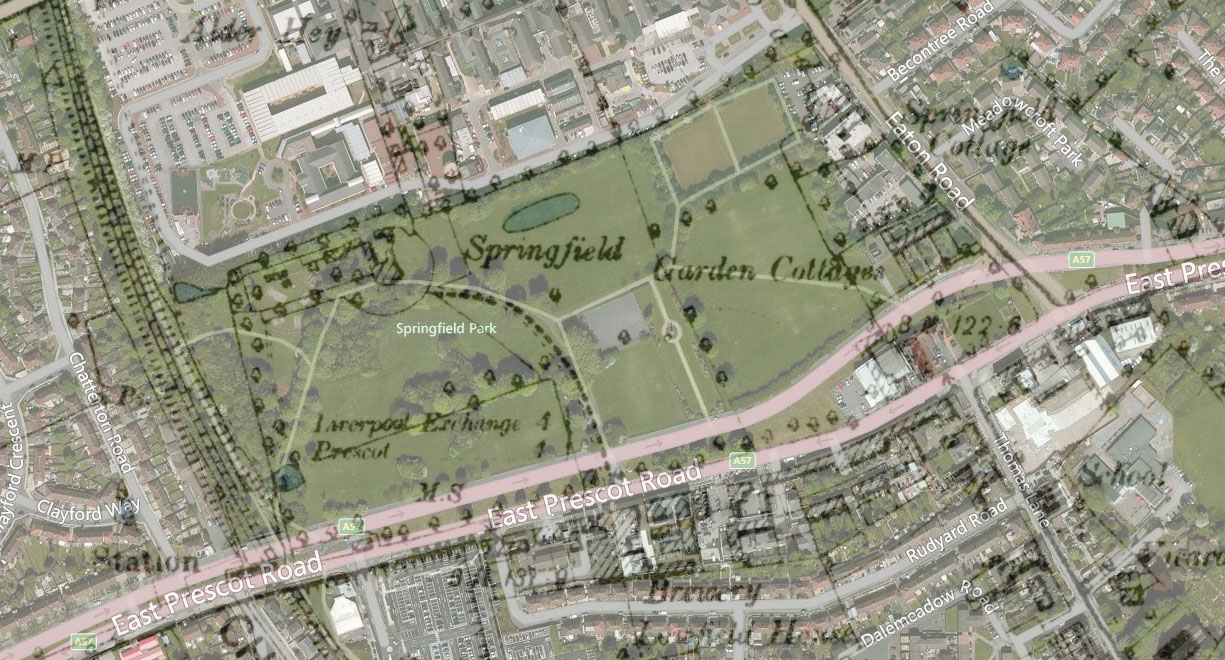 Knotty Ash Village, and Springfield Park, are part of a historic area. They’re on the edge of West Derby and also on the main route between Liverpool and Prescot, and then on to Manchester. The old mail coaches would have flown past in their day, and the tram routes have left their mark in turn.

Today it’s a busy dual carriageway, which splits either side of the Village Hall and runs down one edge of Springfield Park. One particular detail led me to have a closer look at the old maps…

Springfield Park was once the grounds of Springfield House, one of many expensive and out-of-town Victorian properties in the area. The park’s obelisk, a monument to Nelson, was intended as a gift to Liverpool from one of its residents. The man, a sugar merchant called Mr Downward, had his gift rejected (dismissed as a ‘half Nelson’ by some wag on the council). So he decided to put it up in his own back garden, this being the grounds of Springfield Park.

We can overlay the 1888 – 1913 Ordnance Survey with the modern satellite image (see above). This shows how the boundaries of Springfield House’s grounds match up well with Springfield Park. The Nelson Memorial is still in it’s original position, though its mark on the map is feint.

The northern lane of East Prescot Road is the newer one, cutting through the Park. The long driveway to the park almost matches the modern pathway, arcing all the way to the road. From there it crosses the northern carriageway to the southern (the original course of the Prescot road).

The image above shows the Google StreetView of this location for September 2008 (before the construction crew moved in). The Park entrance clearly inherited its placing from the original Springfield House entrance. The gap in the central reservation is a direct descendent of the House’s drive!

And by the looks of things, the new hospital will have an entrance on this site too. What a satisfying conclusion to this phase of the place’s landscape history!