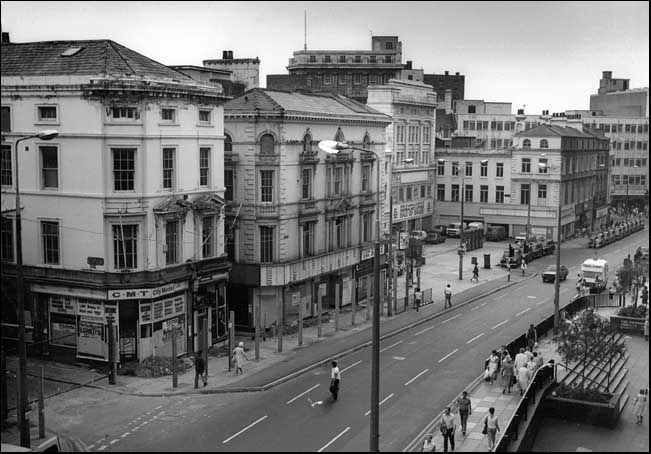 I’ve often written about researching local history, either through maps, books, or old photos. But what’s been highlighted for me recently is that eventually all this feeds back, and you can occasionally use your knowledge gained through research to apply to a particular problem.

Most maps have dates on them. I don’t know about you, but I find a map’s publishing date of absolute importance, to the same extent as it is on a photograph. As becomes clear when you try to trace the changes in an area over time, the best results come from having the smallest possible gap between two maps in terms of their date.

So when I recently bought a couple of A-Z style street maps off eBay, I was disappointed to find no evidence of a date on them. I could tell they were more than a few years old by the paper they were printed on, and the price (“3/-“). I could also tell that they were (only just) post-Second World War (the Customs House was gone, but South Castle Street still ran straight through where Liverpool Crown Court now stands). But as a landscapophile (there’s that word again) and a cartophile, I really needed to know.

The dates of these maps turned out to be c.1962. How did I know? The progress of the Otterspool Promenade happened to be something  I’d been researching for my post on the history of Knott’s Hole. The promenade was already started, but incomplete, and the extent to which this was mapped pointed to the exact date. Cross-referencing this with a few other features (suburban development, dockland changes) confirmed the likelihood of this point in history.

So, you may use maps to increase your knowledge of local history, but you can also use your local history knowledge to feed back on the things you see in photographs and maps (and the photos and maps themselves).

Here are a few other key points in Liverpool’s history that may help you spot when your source was created:

Are there any others you can think of? Remember, these are the things that remodelled acres of the cityscape – things that, quite literally, redraw the map!

Image: Clayton Square in 1986, just before demolition…, from the Chester Walls website.