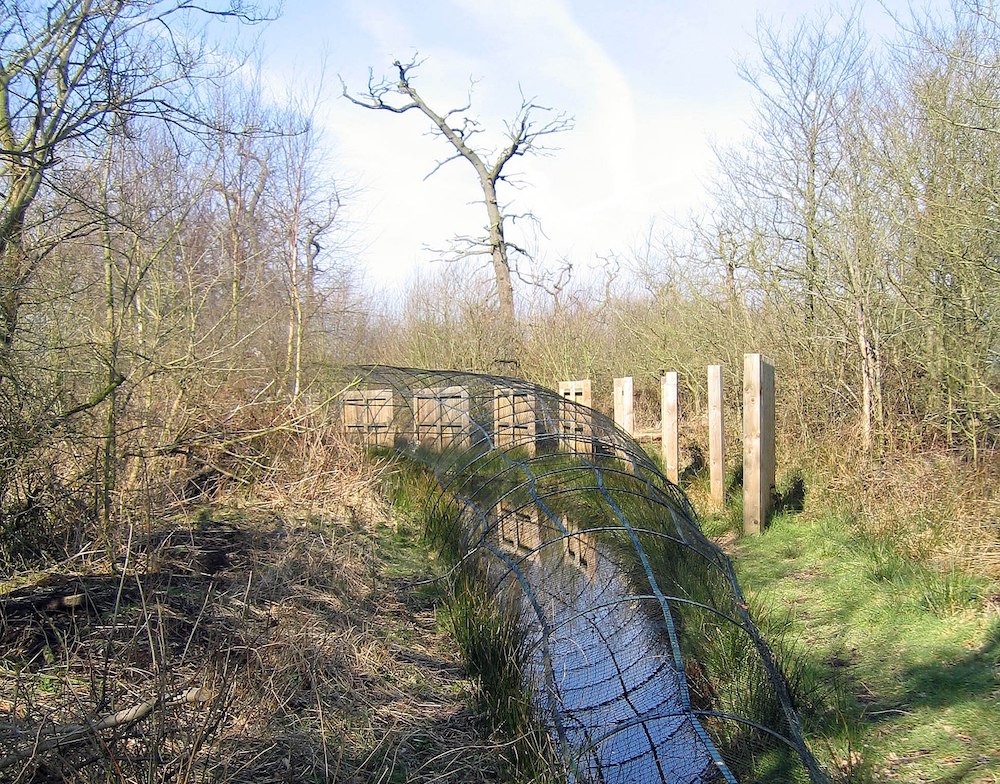 The Duck Decoy at Hale is an impressive, complex monument, now a Scheduled Ancient Monument and a Site of Special Scientific Interest. It lies in the lowest part of the landscape, amongst streams and wetlands and close the the River Mersey itself.

This part of the manor of Hale was drained in the medieval period, with the idea of increasing the amount of land suitable to plough. The trade-off was a reduction in land that wetland wildfowl could use. To counter this, the duck decoy was built.

Hale Decoy was designed to look like the many other coverts that dotted the landscape. The lack of shelter for water birds would make it an attractive spot. A pond was dug in the centre to complete the picture.

The distinctive star shape comes from the five pipes which allowed the game keeper to approach the pond from whichever direction he needed to to keep downwind of the fowl. The pipes were lined with wicker arches, joined together by nets. With the help of his dog, and strategically placed screens, the keeper would scare the birds down the pipes, the netting decreasing in width. At the pipes’ tip, the netting would be small enough to make catching the birds easy.

It’s not certain when Hale Duck Decoy was built, but one clue may lie in a brick near the pond’s boat house. Upon the brick are the moulded figures: X63:RC, which has been interpreted as 1633 (the initials apparently standing for ‘Reign of Charles’. Several decoys were built on the east coast of England in the 17th century, so this date is not unlikely. There are also records of the decoy being repaired in 1754 by Colonel J Blackburne of Hale Hall. The sophistication of this particular decoy do argue for it being a later example.

In 1976 the Cheshire Conservation Trust and the Lancashire Trust for Nature Conservation took over the running of the decoy. This responsibility passed, in 2000, to Halton Borough Council. They managed it as a nature reserve, and in 2001 a group of organisations and individuals met to form the Friends of Pickerings Pasture and Hale Duck Decoy.

Since 2004 the Friends have used a Heritage Lottery grant to improve the visitor experience of Hale Decoy, and make further use of the game keeper’s cottage to help inform visitors about the monument.