The Allerton Oak is a 1000 year old sessile oak that stands in Calderstones Park. It’s surrounded by a double fence to protect its ancient structure, and metal crutches installed in 1907 hold up its branches.

Calderstones Park is in Allerton, which was mentioned in the Domesday Book and has a long history of its own. A long standing legend about the Allerton Oak is that its spreading branches sheltered the medieval hundred court. It would have been similar to the court held in West Derby (whose courthouse is a remnant of this tradition), and was often held at a significant (not to mention recognisable) landmark. The Allerton Oak fits the bill, although Mike Royden has suggested that the meetings are more likely to have happened nearer to the Calder Stones. Given that a boundary dispute map from 1568 uses the Calder Stones as a boundary marker between Little Woolton, Allerton and Wavertree, the mound wouldn’t be the first prehistoric monument to act as a medieval court location in a place like this.

The tree’s history continues to inspire legends. When the Lottie Sleigh exploded in the Mersey on 15th Febuary 1864 (11 tonnes of gunpowder were on board) the blast shattered windows and put out gas lamps across Liverpool. Authorities in Chester rang up to ask what all the noise was about. It’s said that all the windows in Calderstones Manor were shattered, and that a massive split appeared in the tree.

The Oak is indeed split down the middle, and largely hollow, but no one can really say that this was caused by the Lottie Sleigh exploding. Nevertheless, this shows how local history stories interweave across centuries. No doubt the story also helped cement the Allerton Oak’s reputation as an indestructable plant.

During the Second World War, leaves, seedlings and acorns from the Oak were sent in cards to soldiers fighting on the front. Staff from the manor house sent the cards, reminding soliders that they were in the thoughts of people back home, and perhaps to let something of that tree’s long life rub off on the men in danger. The upshot of sending these seedlings abroad is that there are probably young descendents of the tree across Europe and maybe further afield.

A long past and a healthy future for the Allerton Oak

The Allerton Oak has stood tall for over 1000 years. The Liverpool Echo ran a story in the 1970s that suggested it would have rotted to death by 2020, but this report seems premature. The tree is 5.5 metres tall and produces 100,000 acorns every year, so it’s future seems assured.

Despite this, a tree this large puts a strain on itself. The 1907 crutches have kept it upright for over 1000 years but they are in need of replacement. There is an £80,000 project to replace these crutches with more modern support, and which can grow and adapt to the changing tree. There is also a sapling (‘Allerton Oak the Younger’) in the park itself, and Calderstones gardeners are busy protecting this next generation.

The Allerton Oak’s fame is spreading around the world, since it has twice won England’s Tree of the Year (2014, 2019) and is set to represent the country in the European Tree of the Year in 2020. Money raised through these competitions, plus other efforts, will go to helping maintain this ancient tree for many centuries to come.

This is part of a series of posts based on the talks given at the Recent Developments in Merseyside Archaeology conference. It was held on the 13th October 2018, and took place at the Museum of Liverpool. Mark Adams of RSK Consulting spoke about his site at Mark Rake in Bromborough.

Mark dug on the site of the former Rectory Gardens, looking for the remains of a lost Anglo-Saxon sculpture. They were first found when the church was last rebuilt, in the mid-19th century. The story goes that builders crushed the remains for sand, possibly on the order of the rectory’s incumbent!

The excavation at Mark Rake happened in 2016, supported by Big Heritage. Big Heritage had a season of local test pitting as part of ‘Discovering Bromborough‘ back in 2013. Archaeologists found Mesolithic and Neolithic stone flakes, Roman coins and pottery.

The evidence suggested that nothing had been built on the site of Church Croft since at least the 1650s. Perhaps this lack of development would have led to the survival of very old archaeology.

When a new, smaller rectory replaced the old building, builders found fragments of an Anglo-Saxon sculpture. The carvings have since disappeared, so the archaeologists wondered whether they could rediscover them. Their second aim was to look for settlement, from the Anglo-Saxon period or any other.

Looking for a sculpture

The archaeologists dismantled a wall dating from the time of the new rectory, but found no carvings. They then stripped an area for excavation, finding a series of perpendicular ditches. They found a Neolithic arrowhead and Neolithic carinated bowl fragments. These date from 4000 – 3000 BC, and were found in shallow scoops. Mark suspected a cremation, and so took the whole context as a sample. Human bone was indeed recovered from the sample.

Evidence of a settlement suggested a Bronze Age date. There was a ditch or a gully associated with a collared urn (typically Bronze Age).

More gullies dated from AD 650 – 850, encouraging the idea that an Anglo-Saxon sculpture could be on the cards. Environmental analysis discovered barley, rye, wheat and weed evidence.

Finally, on the very last day of the excavation, diggers found a piece of carved stone. Comparison with an old photo of the entire set of sculpture pieces showed that it was part of the collection found in the 19th century. Unfortunately none of the other pieces was found. Mark concluded that the rest had indeed, as the story tells, been ground up for building sand.

Despite not finding the majority of the sculpture, Mark had found a few clues that would help future excavations. Although individual finds are interesting, it is the collection which is important. The assemblage of prehistoric finds in proximity to medieval ones is a pattern that Mark has seen elsewhere, and it’ll be interesting to see if, in future, finding medieval features can lead to prehistoric sites.

There are two other sites: All Saints Church, Childwall, and Overchurch in Sefton, which may yield such secrets in the future. They are ancient sites (All Saints has 14th century masonry in its walls) with very little development since their foundation. If the patterns that Mark sees on other Merseyside excavations are taken further, the prehistory of Merseyside is only just beginning to reveal itself.

Ridge and Furrow formations are possibly one of the best-known archaeological features which survive into the modern day. You can see these long, sinuous raises beds of earth across Britain. They survive particularly well in Northamptonshire, Cambridgeshire and Derbyshire, as well as in other counties.

The remains of this farming technique are visible in two fields in West Derby, both on Eaton Road. The Walker Playing Fields near Kiln Hey are one location, while the Bill Shankly Playing fields on the corner with Barnfield Drive is the other.

They are best viewed in low sunlight, or after a light snowfall. Occasionally a lone golfer tees off from their slopes of a late summer evening!

Ridge and furrow in Liverpool

Ridge and furrow is a form of ploughing that first appears in Britain shortly after the Romans left, and lasted well into the 17th century.

In those times, groups of animals (oxen or, later, horses) pulled a single-sided plough which turned the soil over to one side. This side never altered, which is why the ridge of soil was able to build up. 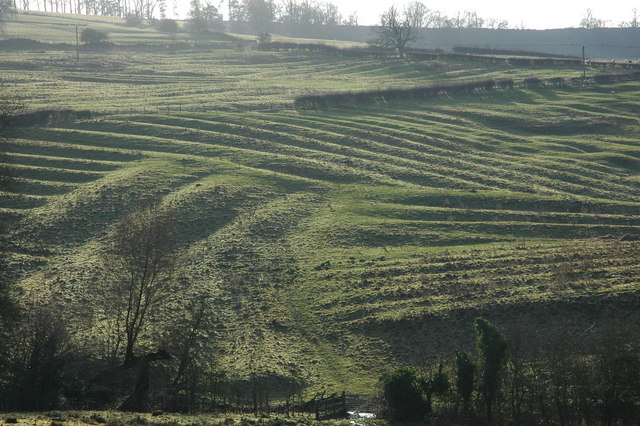 Low sunlight shows off this great examples of well-preserved ridge and furrow above Wood Stanway, Gloucestershire

At the same time, the furrows were useful drainage channels. Crops like wheat were kept high and dry where they would otherwise have drowned. Rainwater would then have flowed down the furrows to a ditch at the bottom of the slope; ridge and furrow always ran up and down slope rather than across.

The ridges were an elongated reverse-S shape – largely straight with slight curves where the plough and animals turned. This helped the team to line up with the next furrow.

Each of the ridges which grew up became known as a land. Lands were a measure of area and value, such as when calculating the work a ploughman had done.

Survival of ridge and furrow

Ridge and furrow lines could be built up to 6 feet in height in some places, and so they take a lot of punishment before they’re wiped from the landscape. Modern ploughing will quickly reduce the ridges to nothing. Where no ploughing has taken place since their formation, ridges can survive up to 2 or 3 feet (almost 1 metre).

The two fields we’re looking at here have remains around a foot tall in some cases. However, the ridge and furrow lies at the edges, as the fields are used for football. The sports fields themselves have been levelled.

What this tells us about West Derby

The moderate survival of this ridge and furrow in West Derby can be taken to mean many things.

Either this land went totally out of use once the open field system was no longer in operation. Or perhaps cattle or sheep were grazed here instead. Ridge and furrow survive fairly well when grazed instead of used for crops.

It’s also a fact that parts of south Lancashire were fairly waterlogged in their natural state. The land may simply have been unsuitable for crop growing.

Perhaps the local population fell to the extent that the number of fields needed for crops went down.

All born-and-bred Liverpudlians (and many more people) will be aware that the city is made up of a collection of villages. The villages used to sit comfortably in their landscape, surrounded by fields, lanes, streams and hills. Over time, they were swallowed up by the emerging behemoth of Liverpool itself.

END_OF_DOCUMENT_TOKEN_TO_BE_REPLACED

But of course none of that is strictly true. There are traces of the Norse presence on our doorstep, and may have paved the way for Liverpool itself to be settled half a millennium after they first arrived. END_OF_DOCUMENT_TOKEN_TO_BE_REPLACED