50 Finds From Manchester and Merseyside: Objects from the Portable Antiquities Scheme 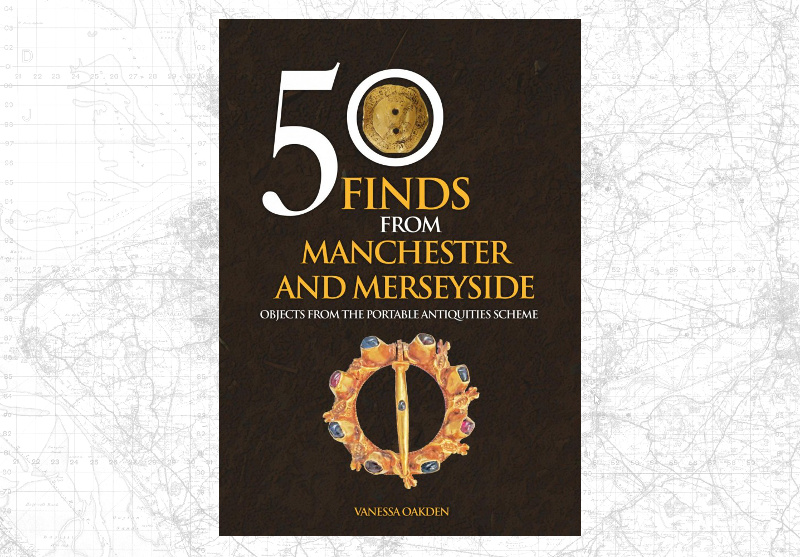 Modern administrative areas have little meaning when we go back even a short time. But they can make all the difference when it comes to modern heritage work. So that’s why we have this book on finds from Manchester and Merseyside, which span the ages, and covers objects discovered through the Portable Antiquities Scheme (PAS).

The PAS was begun in 1997 to deal with the thorny issue of random finds discovered by metal detectorists, ramblers and anyone else stumbling across historic artefacts outside of a formal archaeological investigation.

Until then, the law surrounding what happened to buried artefacts depended on what they were made of. Things deemed ‘treasure’ were generally those which were judged to have been buried with the intention of the owner coming back for them, and this was generally taken to mean coins and precious metal.

So, for example, the famous Sutton Hoo ship was not treasure, because no one intended to recover it, and it was largely wood and iron. However, there’s no doubt that any chance finds from that feature would have been immensely important to archaeologists!

So today, if you find something of historical interest, you can report it to your local PAS officer who will record it and add it to the database. Merseyside’s officer (as well as being the officer for Cheshire and Greater Manchester) is Vanessa Oakden, who’s based at the Museum of Liverpool, and it’s a new book of her’s I’m looking at here.

50 finds from Manchester and Merseyside

This book is just one in a series covering all the counties where the PAS operates, all published by Amberley Press. It takes some of the best finds from the two counties to display the good work of the Scheme.

The book’s not only here to show off the best finds, however, but also to remind readers of the importance of reporting chance finds, and of making a note of where exactly something was found. This is of particular importance if the find is a piece of flint, as often the exact distribution of a scatter of flint debris is what gives archaeologists the important clues.

And what better way to have another round of rivalry with our Manchester neighbours than to compare impressive finds? 😉 (Turns out there are more prehistoric finds, and better ones, from Merseyside!)

The book is a heavily illustrated volume containing colour photos of all the finds mentioned, from different angles, including similar finds from elsewhere which give a bit of context. The impressive thing is that Vanessa shows a wide ranging knowledge, which must be a requirement for the job, at least to some extent. That must be the best thing about the role – coming into contact with different eras of human history each day!

Where does the landscape interest come in? Well, with a county-wide remit, the distribution maps in this book show that it’s not just the individual finds which bring through the knowledge, but how they’re ranged across the land. A national map of terrets (a type of harness fitting) show that they’re particularly common in the north east of England, and therefore all the more interesting when they turn up in south Lancashire.

The challenge for Liverpool and Manchester, however, is that the built-up areas will have destroyed a lot of early archaeology in the digging of cellars and foundations. The most fruitful areas for finds are rural (that’s where the metal detectors go, as well) but it should be remembered that the absence of a certain find type from the urban part of Liverpool doesn’t mean it wasn’t there once. It’s complicated, this stuff!

I don’t have many problems with the book. It’s a good overview of highlights from the PAS in this region, and is a fantastic advert for the scheme (along with the other books in the series). Hopefully it will encourage someone to bring in finds they might otherwise have kept to themselves.

If I had to say anything against it, it might be that the maps could have been a little more consistent. They came from different sources, but could easily have been standardised to help comparisons. There were also a couple of terms I didn’t understand, such as ‘rowells’, mentioned in an entry on a find of broken spurs from Bebington (they’re the spiky wheels on the heel of the spur).

Still, that doesn’t take away much from what is a handy archaeological overview of the counties covered, and finds-centred books are rare on the popular bookshelf.

If you’ve got a book that you’d like me to review, please get in touch via the Contact page.