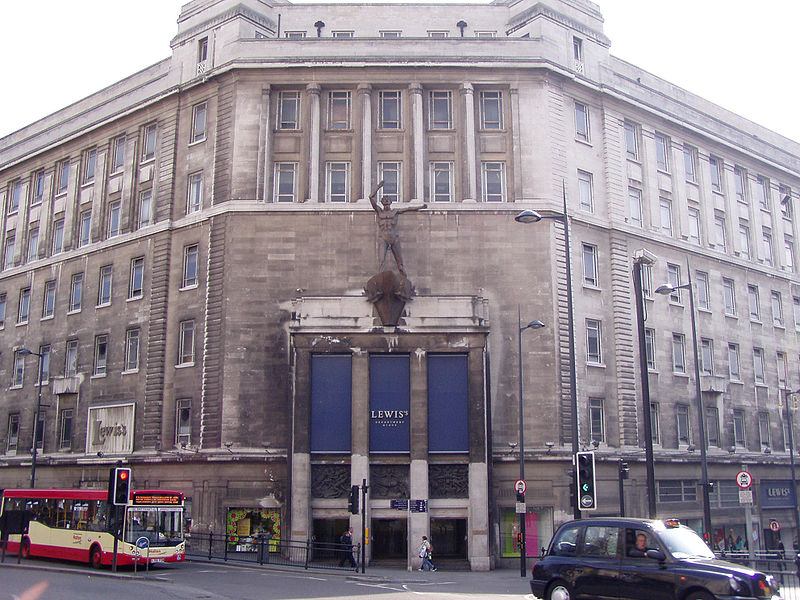 David Lewis founded a small shop selling men’s and boy’s clothing in 1856. The sale of women’s clothes began in 1864, and by the 1870s Lewis’s Department Store was in full swing. There were sections for shoes and tobacco in addition to clothing.

Branches were opened in other cities, beginning with Manchester in 1877. Birmingham, Sheffield and Leicester followed soon after.

The building burnt down in the infamous fire of 1886, and was heavily bombed by the Luftwaffe during the Second World War. Nevertheless, it was rebuilt each time, and was refurbished in 1957. This version included the statue ‘Liverpool Resurgent’, symbolising the city’s renewed vigour following the horrors of the recent conflict.

The fifth floor of Lewis’s has taken on an almost mythical status. In the store’s heyday, the 1950s, the fifth floor was the place to dine in the self-service cafeteria or the Red Rose restaurant. You could also get your hair done in the salon.

A large mural decorated the walls, but this and the other features were hidden from the public in the 1980s. The floor was closed, and remained so until 2010 when it became the focus of an exhibition at the National Conservation Centre.

Lewis’s went into administration in 1991, and all but the Liverpool store were sold off, the majority to competitor Owen Owen. The Liverpool branch continued to trade though, until it went into liquidation in 2007. Bought by Vergo Retail Ltd in the same year, it managed to soldier on until the lease on the iconic building came up for renewal. Due to development of the area, the company was no longer allowed to stay. Despite efforts at negotiation, it remains uncertain whether Lewis’s will have a place in the new Liverpool Central Village.

Recent development meant that the focus shifted to the waterfront and Liverpool One. Also in recent years the Big Dig cut off Lewis’s from its customers. It was no longer the highly fashionable place – complete with a lady behind a lectern to welcome you – to shop.

David Lewis opened his first small store on Ranelagh Street, Liverpool in 1856. It was a small, glass-fronted shop as shown in the drawing on the right.

It expanded piece by piece between 1910-12 into much larger premises, which were gutted by fire in 1888. The building was once again heavily damaged, this time by German bombs, during the Second World War. It is the 1957 building, complete with ‘Dickie Lewis’, which remains standing today. This has survived as part of the redevelopment of the area.

Gerald de Courcy Fraser designed the building in 1947 while, Fraser, Sons and Geary carried out construction. It is built from a steel frame with a Portland stone façade.

There are several classical influences in the building. Red granite columns are topped with Ionic capitals, while the columns on the fourth floor are Tuscan in style. A two-storey colonnade above the corner entrance have Doric-style half columns.

The statue Liverpool Resurgent is accompanied by relief panels depicting scenes of childhood. The figures in the panels are modelled on the sculptor Jacob Epstein’s own children and grandchildren. These represent the younger generation which Liverpool was being rebuilt for.

The lifts, surprisingly, are one of the most interesting features of the Lewis’s Department Store. Some were still in place at least until work on Liverpool Central Village was begun. These lifts are original features of the building, and were operated by a member of staff through use of a lever. There were no controls for the customers! Both the fold-down seats and the lever mechanism are currently still in the building, and are mentioned in the listing description. The passenger lifts at the south east of the building still have ‘clocks’ with coloured lights. These indicated which member of staff was required on the shop floor.

In addition, parts of the original customer escalators survive to the fourth and fifth floors.

The rediscovered fifth floor has wood panelling, panelled doors and a tiled floor corridor. A ten foot high Festival of Britain mural on the eastern wall is made of hand painted and hand printed tiles. Another mural on the south wall shows geometric patterns and cutlery, probably designed by the same artist.

Lewis’s closes down the shutters after 154 years (BBC News)