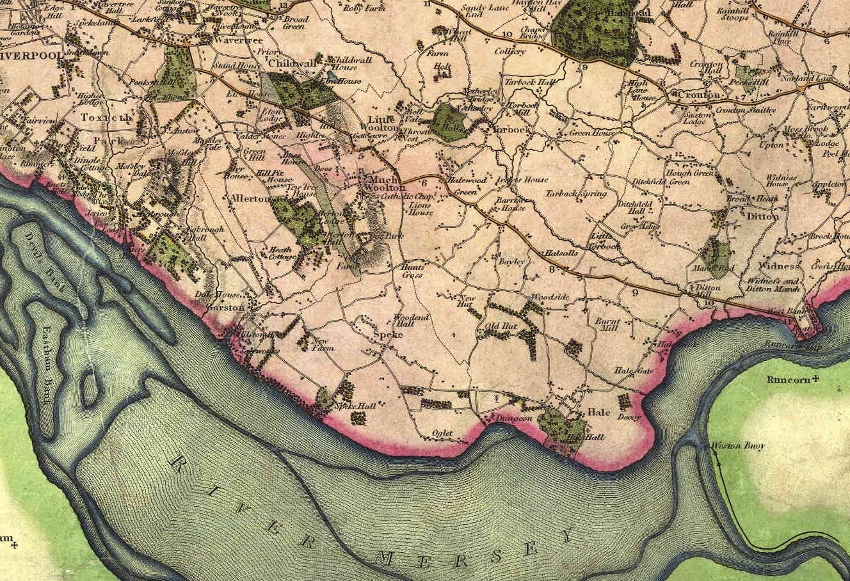 Although the Ordnance Survey maps chart the most significant changed in Liverpool’s history, older maps often are unique. They show details or aspects which no other map does, and can often show what was important to the map-maker. You can’t beat old maps for laying bare the great changes of a city like Liverpool.

Modern maps are often much more ‘objective’ in comparison. But old maps are still of use to the local historian, at the same time as being beautiful objects.

If you know of any others I’ve missed out, or other places where these maps are available, let us know in the comments!

Liverpool developed from seven streets, laid out at its founding in 1215. Soon there was a castle, a chapel and the Tower, a fortified house built by the Stanley family in 1404. Maps of this period (1205-1700) do exist, most of them drawn later. Here are a few of the easiest plans of Liverpool to get hold of.

William Ashton included a simple sketch of 17th century Liverpool in his book ‘Evolution of a Coastline’ in 1920 (above).

The book itself has recently been reprinted, so if you want a higher resolution copy you can pick up ‘Evolution of a Coastline‘ at Amazon.

Genmaps is a map site hosted by Rootsweb (part of Ancestry.com), and has a page on Lancashire maps. There’s a huge range, so I’ve collected the Liverpool entries in the following table. If you’re reading this in the dim and distant future, I recommend going to the original page, hitting Ctrl+F on your keyboard and searching for ‘liverpool’ to catch newer uploads.

Some of them are high resolution, and some not. Others have links to higher resolution versions of extracts below them.

Lancashire County Council has the best collection of old maps for any student of Liverpool history. It runs from a reproduction of Gough’s 1320 map, through all the major map makers: Speed, Yates, Greenwood, Hennet.

Greenwood’s map of Lancashire from 1818, is undoubtedly the best! Click on the exact point you’re interested in, as this map has been cut up into sections when added to the site.

It will take a fuller article to go into all details hidden in maps like these. For us today they provide an immediate visual visit on the past, easy to interpret. For this reason one of my favourites has to be this I now have a high resolution, zoomable version of this map.

It shows quite a lot of detail, including Bootle Castle at the end of Regent Street, an unfamiliarly station-free Lime Street, and is detailed right out to Kensington (the edge of the city back then). Click on the map to zoom in.

Oldest of the old maps

Finally, I want to mention a map I only saw for the first time recently. It is included in the modern edition of The Calderstones by Ron Cowell. The map was made in 1568 to help solve a boundary dispute between Allerton and Wavertree. Not only does it show the Calderstones, but it also shows the mysterious Rodgerstone and the Pikeloo Hill.

Not only does this seem to be the oldest map of the Liverpool area. It’s also a tantalising glimpse of a prehistoric complex now long lost. The map isn’t online, so if anyone has a high resolution scan, do get in touch.

Well, that rounds off this brief excursion into Liverpool maps. There are certainly some I’ve missed, so please share your own sources in the comments!