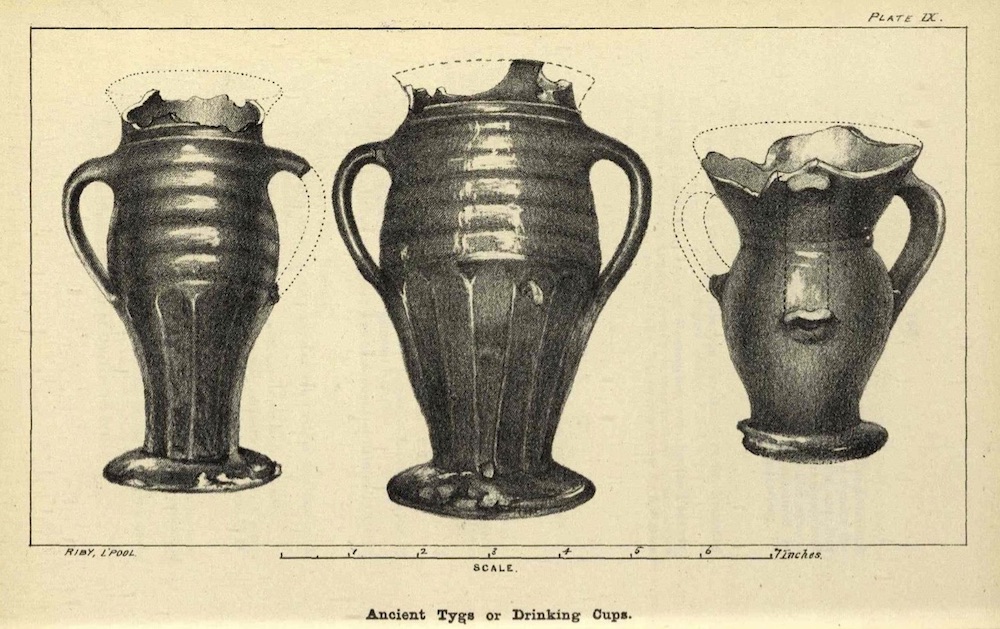 This is part of a series of posts based on the talks given at the Recent Developments in Merseyside Archaeology conference. It was held on the 13th October 2018, and took place at the Museum of Liverpool. This session was slightly different, in that as well as a talk, Jeff Speakman showed attendees pottery excavated from Rainford. People were allowed to handle the pots, and questions were asked in a kind of interactive session.

Rainford, in north east Merseyside, was once a huge pottery and pipemaking centre, only declining in the early 20th century. ‘Faceted tygs‘ are one of the most distinctive types of pot, and the earliest drawing we have is from 1878.

Sam Rowe and a team of archaeologists have been excavating in Church Road, Rainford, to uncover details about the town’s pottery industry. Their ‘Site 10’ was the first pottery site excavated in north west England (with Melling coming second place).

The Golden Lion pub was itself a site of pipemaking.

In 1979 archaeologists excavated a site intended for a new clubhouse and changing rooms on the tennis courts. In 2011 test pitting produced a faceted cup, and in 2013 the Rainford Roots project began. Jeff noted that the test pits for Rainford Roots were incredibly densely packed with pottery sherds. Late 16th century wasters (misfired pots used for packing and protection in kilns) showed that this was definitely an industrial scale of pot making.

Infra red photographs showed field boundaries in the area, but the location of kilns was still uncertain. Three quarters of a tonne of pottery was excavated from the tennis court extension site, close to the earlier digs in the 1970s. Some pots were complete, and in the best condition Jeff has seen across the many sites he’s excavated over years.

Some unusual pieces came from Rainford. Sgraffito is a type of hand carved design where a design is scratched into the top one of two layers of glaze, giving a contrasting colour. A potentially controversial sgraffito item was found (see below). Tygs are three- (or more!) handled jugs made at a couple of sites in north west England (plus a single waster from Stoke). Rainford has a distinctive design which the archaeologists asked a modern potter to reproduce. The rather heavy version that came back was proof, as the potter admitted, that small hands (or a long tool) were needed to craft the fine bodied vessels found at Rainford. This could mean they were made by women or children.

Another unique feature are the handles. Even when the design of the pot itself is seen from other locations, the handles have a ‘twisted’ design, asymmetrical, which is unique to Rainford. This unusual type is found on pots of many different designs.

As well as these highlights, the Rainford Roots team found other interesting pieces. There were one-off pieces found nowhere else, there were chafing dishes, salting pans, a possible alembic tray, hollow handles, decorated sherds, and some things that look like ‘melted’ pots. Some sherds have seed impressions on them, which probably came from seeds which were scattered on the floor of the space set aside for drying.

One interesting piece was one that Jeff saw as potentially idolatrous: it had a rough ‘face’ in the centre, which could be the face of Jesus (see second image in gallery on Liverpool Museum’s blog post). This would have been problematic in an era when the Protestant Reformation had blacklisted images of Jesus.

It’s hoped that makers marks will let archaeologists discover the identity of the potters. Clay pipes often have decoration on them, including makers marks but also other designs that still allow identification of their origin.