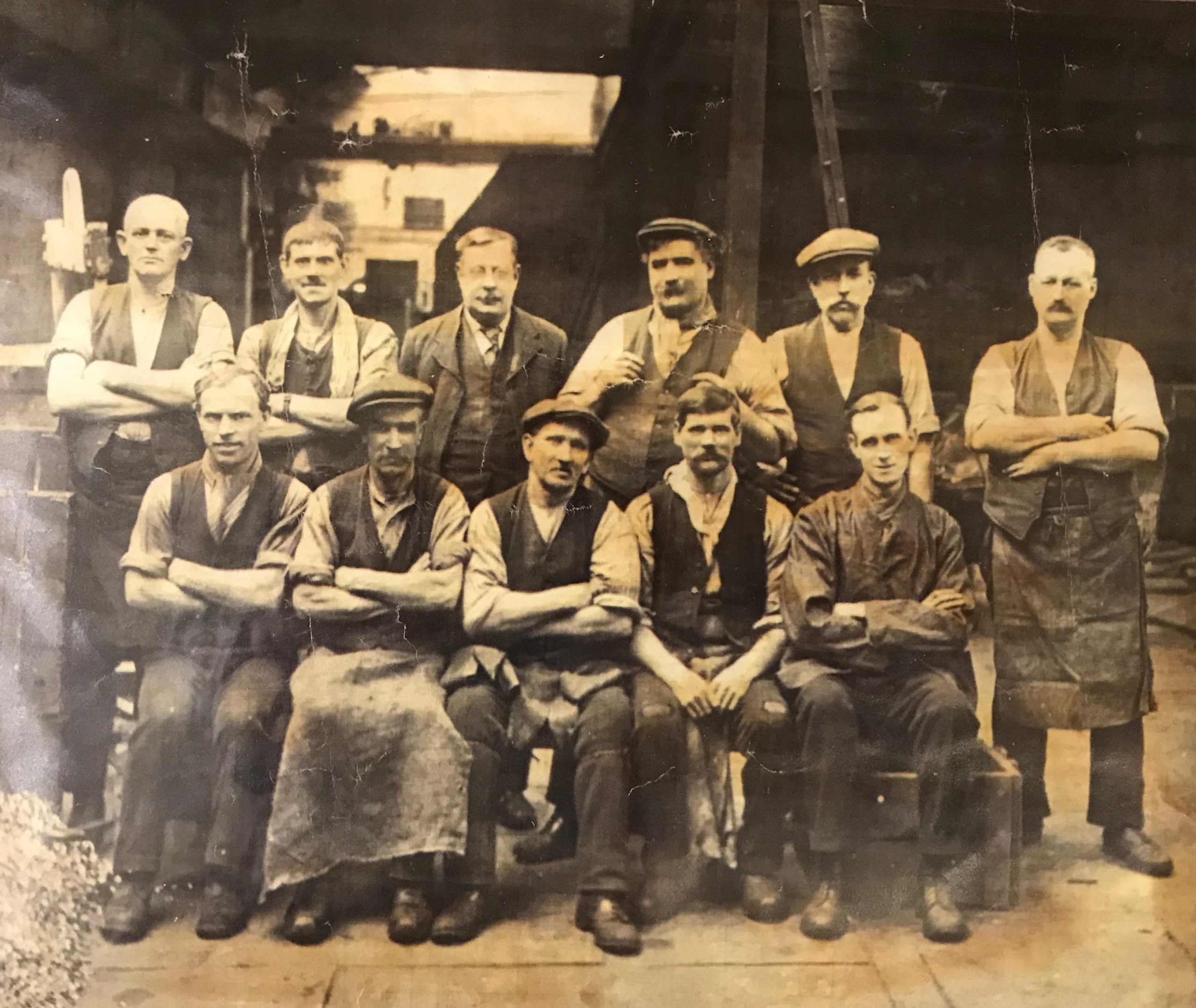 This is another of the guest posts on this blog, this time from John Owens. John got in touch hoping that I or you, dear readers, could help identify the source of some photos of a copper rolling works featuring an ancestor of his (see main article). I’ll pass it over to John now, who takes up the story.

If anyone reading this does know where these photos come from, please get in touch in the comments box below.

The John Bibby Sons and Co. copper rolling mills located in Window Lane, Garston, was one of the first industries in what was then a small village, which was then separate from Liverpool. Previously, it had been located across the water, near Wallasey.

Bibby had founded the famous Liverpool shipping line, and in 1836 went into business with Richard Nevill, the manager of the famous Llanelly Copper Works in south Wales, to build and run new copper rolling mills at Poulton-cum-Seacombe on the bank of the Wallasey Pool. There, copper ingots smelted in St. Helens and Swansea were reheated and rolled into sheathing for the then wooden hulls of Bibby’s ships. Many of the 80 or so workers at Seacombe were recruited from copper workers in Swansea, including my great great grandfather David Owens, as well as the works’ manager.

With the extension of the Birkenhead Docks in the 1860s, the Bibbys transferred the mills (and many of the workers) to then green meadows in Window Lane, Garston, in 1865. Many were housed in the “back to front” houses, then called Bankfield Cottages in what is now Brunswick Street. By the 1880s, David’s son, John Owens had become foreman copper roller man and judging from the front page splash in the Garston and Woolton Weekly News when he died in June 1923 an important business figure in Garston. At its peak, Bibbys’ Garston works employed 250 workers, mostly from south and north Wales or their descendants. Apparently, the Bibby family owners had “a paternalistic streak” and provided financial support for Copper Works, FC, which in the 1890s was Garston’s leading amateur football club.

And so we come to a little mystery about which I am seeking the help of your readers in Garston or anywhere else.

Johnny Owens, my grandfather’s older brother, succeeded his father John Owens as foreman copper rollerman at Bibby’s round about 1916.

A recently discovered 82 year old cousin in Woolton has given me copies of four unique photos, which he says were given to him by a bloke in a pub in Garston many years ago. The bloke apparently knew his grandfather, Johnny Owens. My cousin says he thinks the pics were originally published in The Gentleman’s Magazine in about 1915 but I have not found the photos.

Photos of the Copper Works

So, has anyone seen these photos before? Maybe they have copies. Have they been published somewhere else – possibly in some other specialist magazine of the late 19th or early 20th century? Three of the pics are of Bibby’s Garston Copper Works (not to be confused with the Crown Copper Works built by Bibby’s former manager in 1880 on the other side of Window Lane). Two of the older photos include Johnny (b.1875), who is the big guy (22 stone) holding what looks like some kind of measurement instrument. Judging by Johnny’s age, I think the three older, grainy, pics were taken just after he became foreman, say, 1916-17. The fourth photo is a “team” photo of 11 copper workers, probably taken about 1925, and includes Bibby’s manager at the time, Fred Bawden (born in Cornwall, 1857). Johnny is to his left with thumbs in his waistcoat.

John E. Owens in an Emeritus professor at the University of Westminster