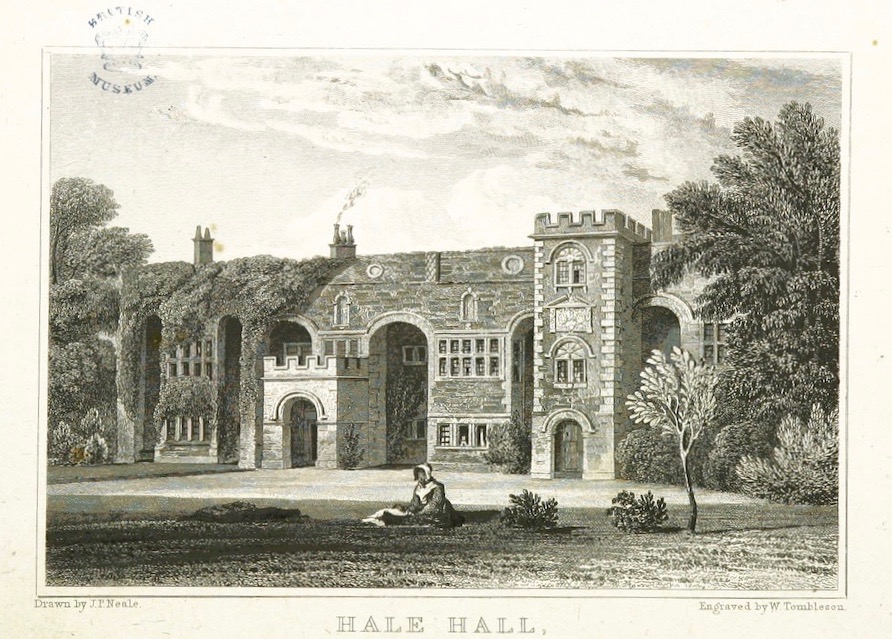 Hale Hall was a quadrangular building, begun in the early 17th century, built of local stone with a red shale driveway. It was altered near the end of the century, and in 1806 John Blackburn added a large south front. This now matched and balanced the existing north front. John also added a lodge to the hall in 1876.

The Hall had a home farm, and kitchen gardens with walls of 3.5 – 4.5 metres height. The walls were built of hollow bricks to allow warm air from underground furnaces to spread through them. The warm walls were therefore a great home for soft fruits like nectarines that wouldn’t otherwise thrive. Later on, glasshouses widened the selection, as did an ice house.

The family at Hale Hall eventually, through marriage, became the Ireland-Blackburnes. A small museum within the house held, amongst other things, a coin collection as well as stuffed birds (the latter collected by Anne Blackburne).

In the 1930s Robert Ireland-Blackburne and his son Gilbert left Hale Hall and moved to Cheshire. The Fleetwood-Hesketh family of Meols bought the estate in 1947. They found the Hall to be in too poor a state for them to live in, so they moved into Parsonage House. After refurbishment and extensions, Parsonage House became known as the Manor House.

When the estate changed hands the new owners demolished the old north front of Hale Hall. Parts of Hale Park became farmland. At some point a fire destroyed the south front too, and Hale Hall fell into a ruinous state. It survived as little more than a playground for children until 1981, when it was finally demolished. (Thanks to Lyn McCulloch for this information.) Some stonework is still visible, even today. Stone window sills, stone lamp posts, pillars and even some of the original trees are still there amongst the woodlands.

The building now known as Hale Manor House started life as Parsonage House. As a parsonage, the house sits just across the road from St. Mary’s Church. It is a much smaller building than Hale Hall, but nevertheless the Fleetwood-Heskeths moved in here in 1947 because of the poor state of the Hall they would otherwise occupy.

The Rev. William Langford added the impressive west face to the house in the 18th century. His coat of arms and monogram sit carved in stone over the entrance. Later on, alterations to this part of the building reduced the storeys from three to two, so increasing the ceiling height of the rooms.

The impressive façade hides two gable ends. The south gable is smaller and older (17th century) while the north is larger and later. The back portion of the south gable still has three storeys, while the front portion, and the whole of the north gable, have two.