History of Bootle: a seaside resort, the docker’s suburb, and industry

Origins of the name: Anglo Saxon Bold or Botle, dwelling.

Bootle began its history as a large, well-defined village completely separate from Liverpool. But as the city expanded, Bootle found itself well-placed during the expansion in the Industrial Revolution. It soon bulged with incoming labourers, using the tram and railway to get to work at the docks. The area became packed with industrial buildings of all types.

Soon, like other ‘lost villages’, Bootle was swallowed up in the expanding metropolis, but traces of the original hamlet can still be picked out today.

If you’re interested in the before-and-after style of books then this is the edition which covers Bootle. Luckily, there’s plenty of text too, so you’re not starved for historical information. 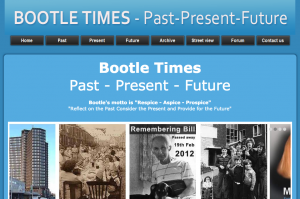 The Bootle Times website seems to be a hive of activity. There are dozens of oral history recordings and an active forum where you can discuss all Bootle topics from history to wanted ads.

Use the slider in the top left to change the transparency of the old map.

The original village of Bootle sat at the junction of Merton Road and Litherland Road. The location is just over a mile from the River Mersey, and Bootle became known as a seaside resort, with Merton Road leading down the hill to the sea.

Towards the middle of the 19th Century, however, Bootle was already starting to see the effects of the expansion of Liverpool to the south.

The 1851 Ordnance Survey First Edition shows Bootle clearly as still a separate village. It’s bounded by Merton Road, Bootle Road (now Hawthorne Road) and Litherland Road. There was no north bounding street (where today there is Waterworks Street), but Bootle Water Works was already in existence by this point.

The start of industry

Bootle’s future as a centre for industry was already being mapped out. The Bootle Chemical Works sat north of the village centre and the Leeds Liverpool Canal skirted the west. The Liverpool, Crosby and Southport Railway and the Liverpool, Blackburn and Accrington Line of the Lancashire and Yorkshire Railway passed on either side.

However, at this early stage in history these great transport links seem to ignore Bootle. Instead they drive towards the more important centre of Liverpool itself.

The docks would also grow to be a major part of Bootle’s future. But in 1851 only a few docks stretched this far north of Liverpool. Instead there was a thick strip of waterside buildings from Liverpool Road (now Seaforth Road) down to Bankfield Street in Kirkdale. These houses stand in rows, and included hotels and pubs.

Bootle Castle sat just north of the northernmost dock (Canada Half Tide Dock), and a church dedicated to St Mary can be seen in what is now the cemetery at Church Gardens. Bootle School was another civic building in the area.

Roads in existence in the mid-19th Century show that great plans were afoot for Bootle. A large area south of the village had already been laid out by 1851, with a handful of roads named after Oxford colleges. In addition to Merton there was Wadham Place and Balliol Road (joined by others later). This arrangement of roads without buildings is a tell-tale sign that planners saw potential for this area to grow in the coming years. 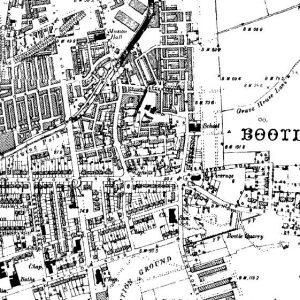 By the end of the 19th Century Bootle is in the midst of a huge phase of expansion, perhaps more than most other outlying parts of Liverpool at this time. The village itself had already been swallowed by the hungry city, although it remained close to the edge of the countryside.

The areas north and south of Balliol Road had been filled with houses by now. Buildings associated with the influx of people were springing up all over the place: Balliol Road Baths, various chapels and recreation grounds, and a football and cricket pitch on Hawthorne Road (now South Park) were just some of the facilities the growing suburb needed. The Northern Recreation Ground first appears on a map in 1894; this later became North Park. The new Liverpool Parochial Cemetery was located in Bootle township, relfecting the more sobering aspects of life in Victorian Liverpool.

Industry was expanding. A rope works opened near West Derby Workhouse. Railways criss-crossed The whole landscape. The Liverpool and Bury Railway extended to Fazakerley in 1867, and the Lancashire and Yorkshire Railway added the Bootle branch and the Seaforth Connecting Line. This was connected to the Liverpool, Blackburn and Accrington Line to the south of Bootle. All these railways branched off into the goods stations lining the docks. The area formerly filled with riverside houses and pubs was now dominated by industrial buildings – branch lines, goods depots and warehouses.

The docklands were ever-changing and expanding. Canada Dock had grown and become Brocklebank Dock, and Alexandra Dock and Langton Dock were the latest northern expansions. Liverpool’s famous Overhead Railway was extended to Bootle (Seaforth Sands Station) in April 1894 (http://en.wikipedia.org/wiki/Seaforth_Sands_railway_station).

West Derby workhouse had been completed in 1869. This was the second building by that name, and served the northern part of West Derby Union (http://www.workhouses.org.uk/index.html?WestDerby/WestDerby.shtml). Parts of this building still survive within Walton Hospital, which now occupies the site.

As well as the main areas of Bootle becoming a part of the city of Liverpool, Litherland, the formerly separate village to the north, was becoming built up by 1894. This was becoming a town popular with prosperous businessmen who wanted to escape the smoky, dirty city. The area was handy for the train and tram systems, and yet was semi-rural in feel. As the map shows, houses here were semi-detached but large, with big gardens separating them from their neighbours. This was a common house type for the upper middle classes in the Victorian period in Liverpool, and the pattern is also found in Allerton, West Derby and on the Wirral.

The next available map in the OS series was published not long after the 2nd Edition of 1894, but the landscape is constantly evolving.

Land to the east of the original village, which in 1894 looked like it might be laid out for housing had by now turned into Derby Park.

New roads hint at Bootle’s aspirations: Hertford and Exeter Roads share their names with Oxford colleges. Shakespearian characters inhabit other streets: Othello, Juliet, Macbeth and Romeo all have roads named after them. These names are still there, although the roads have changed shape over the years.

The hospital, the suburbs and schools: Bootle on the verge of World War Two

The Ordnance Survey produced another maps of Lancashire just before the Second World War.

This new edition shows Bootle Girls Grammar school. This later merged with Balliol County Secondary School, with the current building opening in 1987.(Thanks to Pete for giving me this information in his comment below).

The Grammar school building replaced a handful of large houses, including Breeze Hill House. This house had given its name to the road which ran east-west to the south of it, and the road still bears its name.

The number of houses in the area kept growing, with Orrell Park expanding up to the edge of the Bootle Goods Branch of the London, Midland and Scottish Railway. The West Derby Union Workhouse had now become Walton Hospital.

Industry was still expanding. The wire rope factory seen on the previous map was changing with the times, becoming the Electric Cable Works. A tar distillation works had appeared on the site of the carbonic acid gas works, and tar distillery had opened towards Linacre on Hawthorne Road. Neighbours of this included a rubber works, two tanneries, a lead works and a cooperage. Today this area is still a mass of warehouses, lorry depots and small factories.

The railways contract, but Bootle goes on: the 20th Century

By the middle of the 20th Century Bootle had settled into the form it is today. What began as the Aintree Sorting Siding had grown into a massive spider’s web of rail on the boundary between the two townships. But the culling of the railways was in full swing by this point. The 1978 map shows that many had already been abandoned, and were probably becoming overgrown by this time. Even today, some stretches through Bootle and Walton remain green tracks. The bridge over the modern Merseyrail track just north of Lynwood Road is part of one such section which lies just behind the everyday facade of north Liverpool.